Ellen Ripley is rescued by a deep salvage team after being in hypersleep for 57 years. The moon that the Nostromo visited has been colonized, but contact is lost. This time, colonial marines have impressive firepower, but will that be enough?

So was it really all that bad?

And should it still be considered canon?

Should it still be considered canon in what context?

It, of course, retconned the beginning of Alien 3.
Basically that was not Hicks in the e.e.v. apparently, but a dumb marine who entered the Sulaco and ended up swapping places with Hicks. Like you do!
The game itself was not very good, apparently. Alien Isolation is much more well regarded.

Films are films and game are games. They are two separate entities.

One might be "based" on the other, but for me that's where the connection ends. "I say we take off and nuke the site from orbit. It's the only way to be sure."

Thanks for the 30 year reunion clip Doc! That rocked!! It also served as a great reminder that this was and is, still my favorite of all of Cameron's films. Maybe because his ego wasn't so "Titanic" back then!

Janine The Barefoot said:
Thanks for the 30 year reunion clip Doc! That rocked!! It also served as a great reminder that this was and is, still my favorite of all of Cameron's films. Maybe because his ego wasn't so "Titanic" back then!

His ego has always been big. But with Cameron, the more money he gets for a movie, the worse they are.

And that's what makes it the rare sequel that stands as an (almost) equal to the original. Most sequels fall into the trap of making the same movie as the original but with more explosions/jokes/villains/etc.

Participating in a live Facebook chat for the upcoming 3D re-release of “Terminator 2: Judgement Day,” filmmaker James Cameron has offered brief updates on a few things.

First up, the return of T2 in 3D is being used as a sort of test case and should it bode well, he says he’d want to give “Aliens” a 3D re-release next:

“We haven’t proven the business case yet so ask me again in a couple of weeks if T2 Judgement Day in 3D does well. I think the next title on my list, in terms of fan enthusiasm, would probably have to be Aliens… Aliens seems to really hold up in people’s minds and that would probably be my next one. But we’ve got to prove the business case here so people have to show up. So show up.”

He offered a critique of the recent “Alien Covenant,” calling it a “great ride” but NOT a film he would have made. He also touched upon the upcoming “Terminator” film he’s involved with, reiterating an earlier point that he wants to explore the origins of the T-800. He then added that they’re also “talking pretty seriously” about it being the first of a new trilogy.

Finally, he also spoke about the long in the works “The Abyss” and “True Lies” Blu-rays. Both films only exist as poor-quality DVDs and so-so quality broadcasts. Both have recently been remastered (Abyss for 4K apparently) and many have been keen to know when we’ll finally see them. Cameron says:

“Working on that. The True Lies Blu-ray and The Abyss Blu-ray have sort of fallen off my ‘to do’ list getting the not one, not two but four “Avatar” sequels stood up and going. But now that that’s happened, I can actually take care of business. So that’s coming, absolutely.”

Doctor Omega said:
getting the not one, not two but four “Avatar” sequels stood up and going. But now that that’s happened, I can actually take care of business. So that’s coming, absolutely.”

Dear god!!!!
That man's head is sooooo large it's a wonder he can even carry it around on his own neck anymore!

Or is he wearing one of those "dog collars of shame" for support these days?! And to think I just did a rewatch of Alien and Aliens last week!

Speaking of which, I don't know if anyone has seen it lately but A/2 now includes a section of the colonists on LV426! We get to meet Newt, her parents and her brother along with all the other colonists, two of whom are referring to the "memo" sending them out to check out "whatever it is they want us to look at" and wondering if they'll "get a share". Having no idea a DVD had been put out that included that in it, it was a pleasant surprise..... which in no way implies I want to toot JC's bloody "Horn". He certainly is more than capable of that without help from anyone at all.

And for rewatching oldies but goodies!

So sad. He was great in the film.

I recall one reviewer saying, the moment his character woke up from hypersleep and put the cigar in his mouth he had already completely won the audience over. 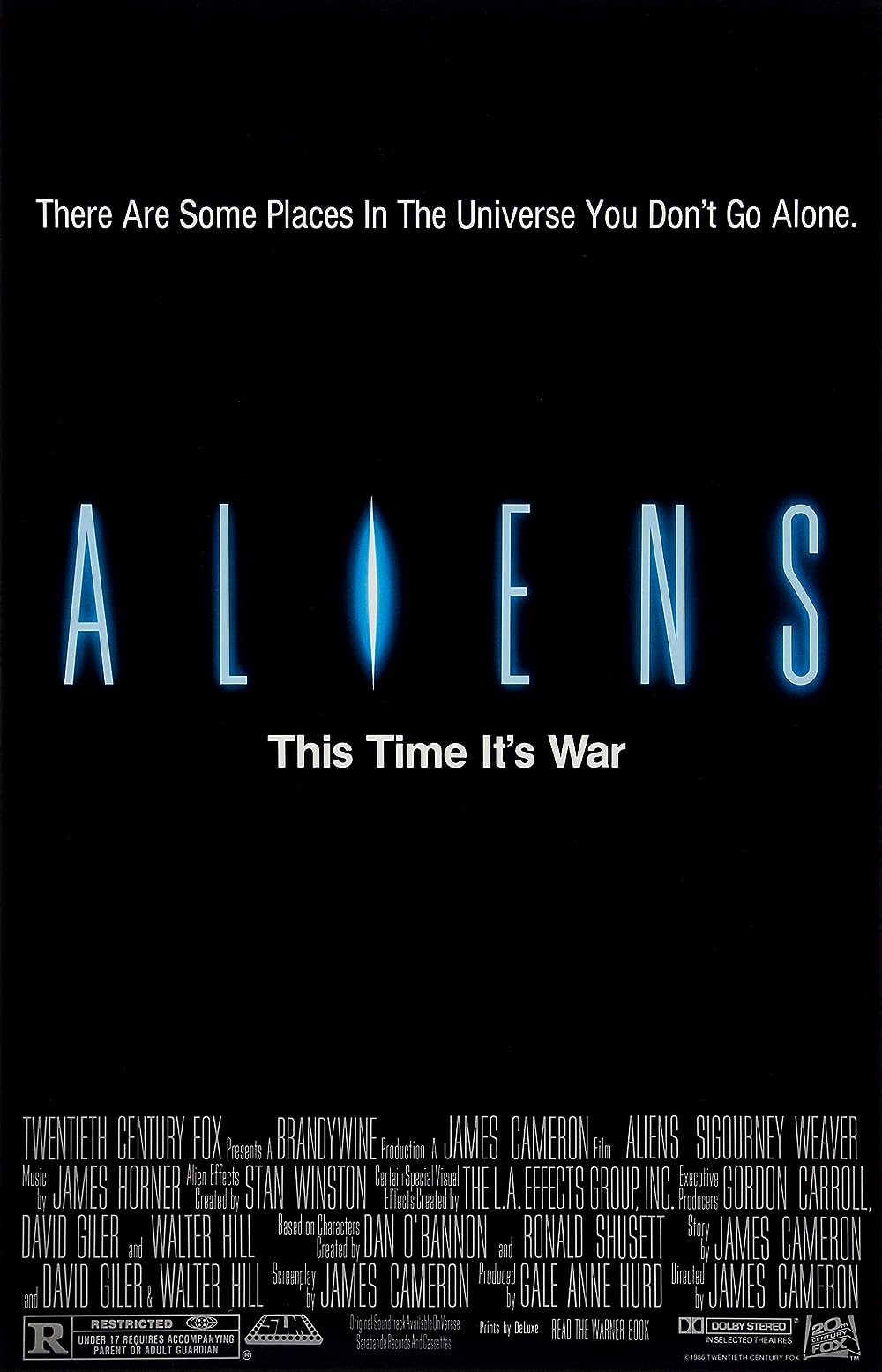 Aliens: Directed by James Cameron. With Sigourney Weaver, Carrie Henn, Michael Biehn, Paul Reiser. Fifty-seven years after surviving an apocalyptic attack aboard her space vessel by merciless space creatures, Officer Ripley awakens from hyper-sleep and tries to warn anyone who will listen about...