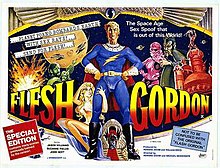 Flesh Gordon was shot in 1971 and, according to producer Bill Osco, cost $470,000 to make. Osco intended to hold out for a major distributor to pay a $1 million advance to secure the American release rights.[2]

The film was first assigned a MPAA rating of X, but was then re-edited, finally receiving a reclassified rating of R. The film's original running time was 78 minutes, but the later, unrated "collector's edition" video release runs 90 minutes.

Flesh Gordon employed special effects artists who would later gain Hollywood fame, including Mike Minor, Greg Jein and Rick Baker. Established effects artists Jim Danforth (listed backward in the film credits as Mij Htrofnad) and Dave Allen also worked on the film. The film's low-budget special effects were achieved using old-fashioned techniques: For example, the model of Wang's palace was created using everyday objects, such as drinking glasses, and was designed to resemble Griffith Observatory so actual footage shot at the base of the observatory could be integrated in the film.

Los Angeles-area Star Trek fan and writer Bjo Trimble was a makeup artist on Flesh Gordon; she described these experiences in her book On the Good Ship Enterprise: My 15 Years with Star Trek. Other Los Angeles-area science fiction fans worked, at times, in various capacities on the film, including science fiction and fantasy artist George Barr who designed and illustrated the film's one-sheet movie poster, and Cornelius Cole III, who animated the film's opening title credits sequence. Longtime fan and science fiction and fantasy writer Tom Reamy served in the film's Art Department as the production's Property Master. He tracked down many of the screen-used props in the film, including authentic, full-sized Ford Tri-Motor wicker passenger seats (matching the film's Tri-Motor aircraft miniature) used in an early scene in the film.

Also according to Ziehm's DVD audio commentary, Universal Studios was planning to sue Graffiti Productions over the first part of Flesh Gordon being too similar to the first chapter of Universal's 1936 Flash Gordon serial film that it bordered on plagiarism. To avoid a lawsuit, Ziehm added an opening text scroll that stated that Flesh Gordon was a burlesque style parody of the Depression Era superheroes of America's past; he also added "Not to be confused with the original Flash Gordon" to all advertising materials.

Vivian Sobchack commented that Flesh Gordon is "a skin flick hilariously molded around the Flash Gordon serials, and fully and lovingly aware of genre conventions from special effects to dialogue".[4]

A sequel, Flesh Gordon Meets the Cosmic Cheerleaders, followed in 1990.

A four-issue comic book miniseries, written by Daniel Wilson and published by Aircel Comics, was published in 1992.[6]

Doctor Omega said:
A four-issue comic book miniseries, written by Daniel Wilson and published by Aircel Comics, was published in 1992.
Click to expand...