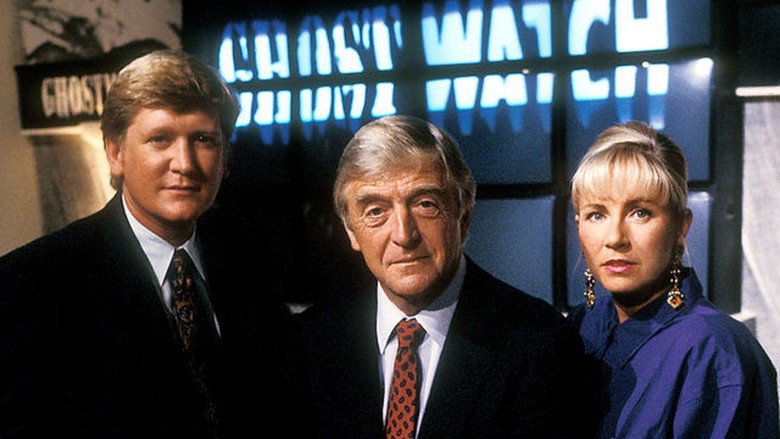 Who was watching on the night it was broadcast?

And, if you weren't, what do you make of it all?

Dim memories of being pants-wettingly scared. But to put that into context, I whetted my horror teeth on Noggin the Nogg, The Singing Ringing Tree, Ace of Wands and VERY early Doctor Who - I mean Yetis on the Underground, Daemons and the like. And that's only the stuff that was age-appropriate! (Apparently). As a Yorkshirewoman, that fact emerged with Ghostwatch that Parky Himself was playing silly buggers - and I found that was unnerving in itself!
Conversely, when the wondrous Derren Brown did his Seance in - I think - 2004-5 - , I called channel 4 to praise it - because I knew it'd be getting lots of complaints from the truly superstitious and mealy-mouthed. They were surprised, but a bit chuffed all the same and assured me they were logging the call on the list in favour of great theatrical entertainment.

Ghostwatch: The BBC spoof that duped a nation

An article that discusses the show and a suicide that followed the broadcast......


In Nottingham, April and Percy Denham were sitting down to watch the programme together with their sons, Martin 18, and Gavin, 14.

The pair recalled how their elder son became more and more agitated throughout the broadcast.

"He sort of curled up while watching it. We asked if he was alright, but he seemed hypnotised by it," says Mrs Denham.
Click to expand...

Meanwhile, in the days that followed the broadcast, the Denhams noticed a change in Martin.

The radiators in their house had a habit of being noisy when warming up and Martin suddenly asked to move bedrooms, though he never explained why.

"He seemed entranced with the talk of ghosts," Mrs Denham remembers.

"He seemed a bit upset because things were happening at that time in the house that had been happening [on Ghostwatch]. The pipes were banging," his stepfather adds.
Click to expand...

Five days after the broadcast, Martin killed himself. A note in his pocket, addressed to his mother, read: "If there is ghosts I will now be one and I will always be with you as one".

The Denhams learned of his death when police came to their places of work.

"I went crackers," Mr Denham says. "I started swearing. When I heard about the [contents of] the note, I knew it was that programme."
Click to expand...

The BBC's Most Controversial TV Show - Inside A Mind

Reality and Fiction have blurred together many times on TV and media. This is one of the very first cases that gained mainstream attention before the BBC made attempts to cover it up. Ghostwatch was a TV Programme that aired on 31st October 1992, appearing to be a live broadcast going horribly wrong. Gaining 20 - 30,000 phone calls all at once while it was live
Click to expand...