Hart to Hart is an American mystery television series which premiered on August 25, 1979, on ABC. The show features Robert Wagnerand Stefanie Powers who play Jonathan and Jennifer Hart, a wealthy couple who lead a glamorous jetset lifestyle and regularly find themselves working as amateur detectives in order to solve crimes in which they become embroiled. The series was created by novelist and television writer Sidney Sheldon. The series concluded after five seasons on May 22, 1984.

The premise of the show is summed up in the opening credits sequence, narrated by Max (the Harts' butler) as he introduces the characters:

This is my boss – Jonathan Hart, a self-made millionaire. He’s quite a guy. This is Mrs. H – she’s gorgeous. What a terrific lady. By the way, my name is Max. I take care of them, which ain't easy, 'cause their hobby is murder.

Beginning with Season 2 onward, the opening lines were slightly changed:

This is my boss – Jonathan Hart, a self-made millionaire. He’s quite a guy. This is Mrs. H – she’s gorgeous. She’s one lady who knows how to take care of herself. By the way, my name is Max. I take care of both of them – which ain’t easy; ‘cause when they met, it was murder.

Jonathan Hart (Robert Wagner) is the CEO of Hart Industries, a global conglomerate based in Los Angeles. His wife Jennifer (Stefanie Powers) is a beautiful freelance journalist. Living the jetset lifestyle, the Harts often find themselves involved in cases of smuggling, theft, corporate and international espionage and, most commonly, murder. At their opulent Bel Air estate, they are assisted by Max (Lionel Stander), their loyal, gravel-voiced butler, cook, and chauffeur who also helps with their cases. The Harts' beloved pet dog is a Löwchen called Freeway, so named because he was a stray that they found wandering on the freeway. The Harts own a Mercedes-Benz 300 TD diesel wagon, a dark green Rolls Royce Corniche convertible (replacing the Series III Bentley custom cabriolet in the first season), and a yellow Mercedes-Benz SL roadster (1979 450 SL, replaced by a 1981 380 SL) with personalized California vanity plates "3 HARTs", "2 HARTs", and "1 HART" respectively. The opening credits sequence also shows Jonathan Hart driving a red Dino 246 GTS. They also own a Grumman Gulfstream II private jet, which is featured at the start of the opening credits.

Screenwriter and novelist Sidney Sheldon had originally written a script for CBS entitled Double Twist in the early 1970s about a married couple who were also both spies. The script remained unfilmed for several years before producers Aaron Spelling and Leonard Goldberg decided to update the idea for a potential television series. They offered the script to screenwriter Tom Mankiewicz, who had by that time written several screenplays including three of the James Bond films.

Their instruction to Mankiewicz was to update the script to make it more contemporary and viable for a potential weekly series. They also told Mankiewicz that if his draft was successful, he would also be able to direct the pilot episode himself.[1] Mankiewicz reworked Sheldon's original script and it was renamed Hart to Hart, emphasizing the romantic aspect of the couple. Mankiewicz also made his directorial debut with the pilot episode as planned, and remained a creative consultant to the series afterwards. The first ten episodes were developed by Mankiewicz and the series' original story editor Bob Shayne.

Spelling and Goldberg's initial choice for the role of Jonathan Hart was Cary Grant. However, Grant (who was 75 years old at the time) had effectively retired from acting some years earlier (with his last film Walk Don't Run in 1966). They then decided to find a younger actor who might embody the same style, zest and persona that Grant was famous for and offered the role to Robert Wagner. No one else was seriously considered for the role; George Hamilton had a high profile at the time and was suggested but Aaron Spelling said that if he was cast "the audience will resent him as Hart for being that rich. But no one will begrudge RJ [Wagner] a nickel."[2]

ABC wanted Wagner's real life wife Natalie Wood to co-star with him as Jennifer Hart but Wagner didn't think it was a good idea (however, Wood makes a cameo appearance in the pilot). Initial choices for the role of Jennifer Hart included Suzanne Pleshette, Kate Jackson and Lindsay Wagner, but Wagner suggested Stefanie Powers who had previously worked with him when she made a guest appearance in an episode of his action-adventure series It Takes a Thief in 1970.[2]

Wagner wanted Sugar Ray Robinson to portray Max but ABC-TV executives were worried about a black man playing the butler/houseman to a rich white couple. Eventually they cast Lionel Stander, who had also worked with Wagner in an episode of It Takes a Thief. In that episode ("King of Thieves"), he also played a character named Max who was a lifelong friend.

The main title theme for the series was scored by Mark Snow.

Fashion and jewelry designer Nolan Miller, who later designed the clothes for Dynasty, was the costume designer for show.

The ranch-style house used for exterior filming was previously owned by actors Dick Powell and his wife, June Allyson. Powell was an old friend of both Robert Wagner and Aaron Spelling. The actual estate, known as Amber Hills, is situated on 48 acres in the Mandeville Canyon section of Brentwood, Los Angeles. In the series, the Harts' address is given as 3100 Willow Pond Road, Bel Air: the real address of the house is 3100 Mandeville Canyon Road.

In 1993, almost a decade after the series ended, Wagner and Powers reunited for a series of Hart to Hart TV movies. Eight 90-minute telemovies were made in total between 1993 and 1996 and aired on NBC:

Lionel Stander reprised his role as Max in five of the movies before his death from lung cancer on November 30, 1994. His last ever screen appearance was in Secrets of the Hart, which aired in March 1995.

In September 2015, Deadline.com reported that NBC had made a script commitment to a Hart to Hart remake series featuring a gay male couple. Written by Christopher Fife and produced by Carol Mendelsohn and Julie Weitz, the new series is described as "a modern and sexy retelling of the classic series that focuses on by-the-book attorney Jonathan Hart and free-spirited investigator Dan Hartman, who must balance the two sides of their life: action-packed crime-solving in the midst of newly found domesticity."[4] A similar project had been announced more than a decade earlier in 2002, with Alan Cumming attached to star in a series being developed for ABC that was being touted as a "gay Hart to Hart". Titled Mr and Mr Nash, the planned series featured a gay couple, both interior designers, who "stumble upon a murder each week", but it ultimately never went into production

On June 6, 2013 (June 7 in the Eastern Time Zone), Adult Swim aired an edition of The Greatest Event in Television History. Hosted by Jeff Probst, the program went behind the scenes during the making of a shot-for-shot remake of the Hart to Hart opening sequence, with Adam Scott and Amy Poehler respectively in the roles of Jonathan and Jennifer Hart, and Horatio Sanz as Max.[12] The remake followed a similar effort in the fall of 2012, adapting the opening credit sequence of Simon & Simon. 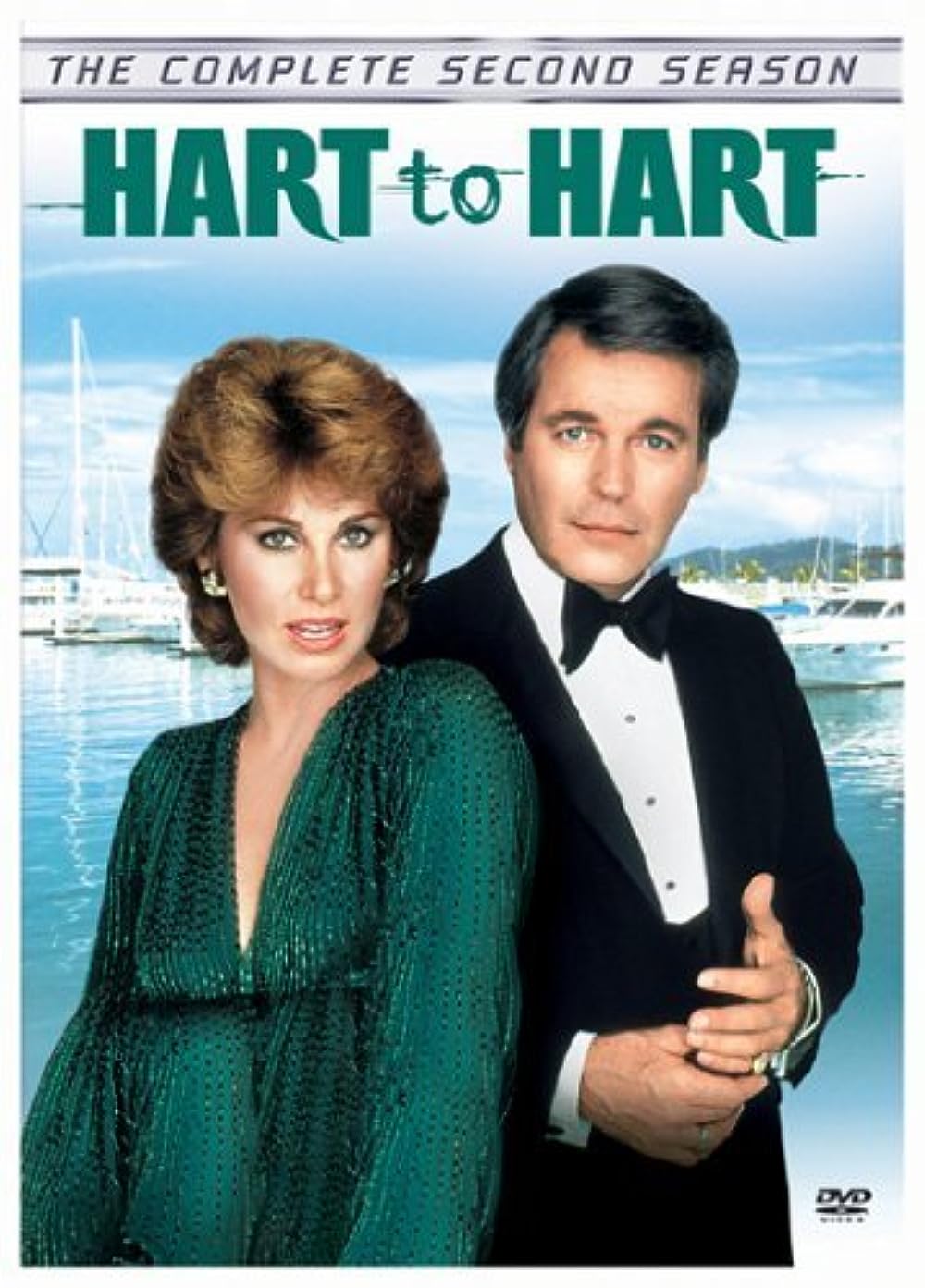