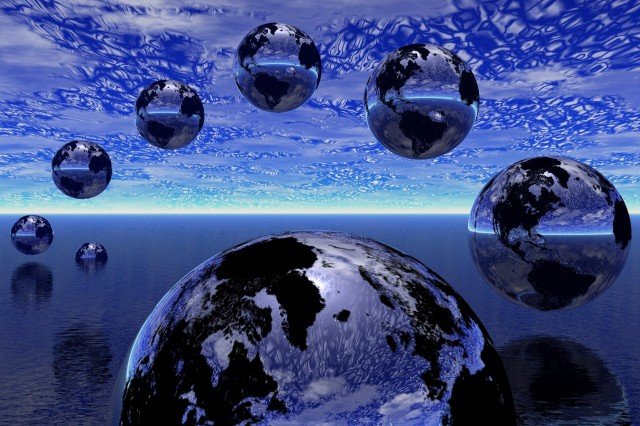 You turned left when you should have turned right.

Do you believe that there is an alternative universe existing alongside ours where you did turn right, with all the repercussions of that decision following on?

I believe there are precisely seven universes. No more, no less.

And in one of them, I have a moustache.

VIP
I think the Berenstein/Berenstain Bears issue is proof of multiple universes and that people can and do cross over between them.

Gavin said:
I think the Berenstein/Berenstain Bears issue is proof of multiple universes and that people can and do cross over between them.
Click to expand...

You're talking about the Mandela Effect. I still remember the movie Interview with a vampire where all my family members clearly remember it as "interview with THE vampire".

My wife is the only one who remembers it as "a" instead of "the"... a lot of more coincidences with her and some of my friends that the rest of my family remembers it differently. I also prepared several topics that where controversial to some of my friends and they either remember it like I do or the other way around... no in-between which is weird as f*** !!

Wow! Just checked and this is a proper phenomenon.

Staff member
VIP
Indeed it was !. This is a real phenomenon, wheter they are changing the names on purpose or not, things are CHANGING ! and people that experience this phenomenon are not crazy!

Okay, I just had my own Mandela Effect moment!

I remember this series having a different breed of dog!

The dog I remember being in it looked more like this....

To be serious The Universe is the totality of all dimensions however exotic, so parallel dimensions or worlds would still be part of the actuality that is the universe as distinct from non actualized i.e. non existent.
Possible World theory or modal realism is basically a metaphysical linguistic trick to explain vague sentences like " I could have been a movie star"
Philosopher, the late David Lewis went a step further and believed in the actualization of infinite possible worlds, existent but causally separate from our world. World meaning our actual world i.e. totality of The Universe.
See " metaphysics -possible worlds" thread for details of this bizarre notion which got other philosophers saying " Lewis doesn't think these worlds actually exist does he? "
"yep he does" or did.
Last edited: Dec 4, 2017

I actually went to see that film "ANOTHER EARTH" at the cinema.

I actually went to see that film "ANOTHER EARTH" at the cinema.

Glad you liked it, lecturer Ollie does two fascinating talks on the essence of time, well worth checking out.
Like your new avatar!
https://www.imdforums.com/threads/metaphysics-of-time.3182/

Everyday Chemistry is an "unreleased" studio album by The Beatles that came into the possession of an unnamed person identified only by the pseudonym "James Richards", under mysterious circumstances after crossing to a parallel world where The Beatles never broke up.
Click to expand...

Everyday Chemistry is a remix album of unknown authorship that was made available as a free digital download on September 9, 2009.

It mashes up various songs from the Beatles' individual solo careers, intending to present an album that the members would have recorded had they not broken up.

The album was accompanied by a story written by an anonymous person under the pen name "James Richards".

Richards describes meeting a man named of Jonas who lives both in the real world and a parallel universe in which the Beatles never broke up.

Jonas and Richards both discussed their enjoyment of the Beatles.

In return, Jonas gave Richards a cassette tape containing one of their albums from that imagined timeline.

Richards denied that the album was composed of mashups, reasoning that "even though in the alternate universe the Beatles hadn't broken up, that didn't mean their future music ideas disappeared."

Staff member
Philosophically, I like the idea of a multiverse and want it to exist...

However, what I want and what is "real" are often two completely different things.

Of course, in recent times, I've become increasingly aware of the phenomena known as the Mandela Effect and once again the idea of a multiverse comes to my mind...


Like many of you ( A few Billion by now) I was blown away when I ran into the Mandela Effect and realized reality is not what I remembered it to be. All you Flat Earthers out there think you got a hold of deep profound sh!t eh? Well, guess what? All you got is an appetizer. Who cares about the shape of the Planet when you realize you're NOT ON THE SAME EARTH you were born into.
Click to expand...

The mind behind movies like Blade Runner, Minority report, Total Recall, and if you got Amazon’s version of Netflix “The man in the high castle” What about him? Well, I love PKD as a writer and even more as a human being because he was dealing with this sh!t long before any of us were even born. But his personal reality is a bit dark for my taste. However, I can’t thank him enough for having the stones to put this out in 1977.
Click to expand...


DICK: "We are living in a computer-programmed reality.- and the only clue we have to it is when some variable is changed and some alteration in our reality occurs."
Last edited: Mar 3, 2018

A genius touched by madness? Or could he have been on to something?

But who built the computer?
And if we are not here and now, where and when the heck are we really?

Doctor Omega said:
But who built the computer?
And if we are not here and now, where and when the heck are we really?

Are you familiar with the YouTuber Isaac Arthur?