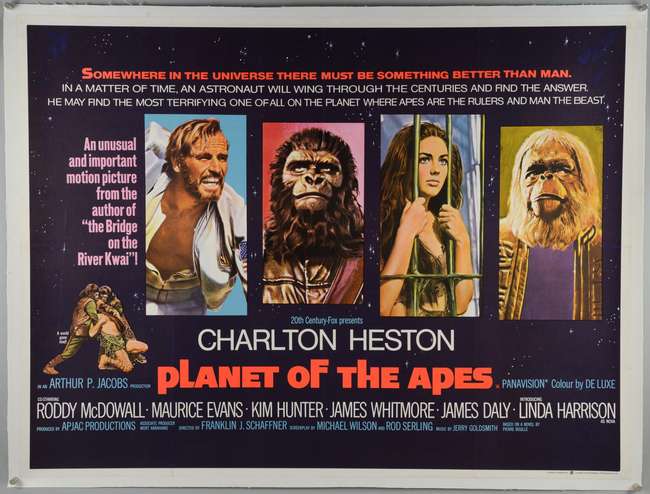 Your thoughts on this, the film that started it all?

Still the best one, whether of the old or new films?

Doctor Omega said:
Your thoughts on this, the film that started it all?

Still the best one, whether of the old or new films?
Click to expand...

Certainly the best of the original franchise. I don't think it's fair to compare the old and new films as film technology has changed so much in the interim.

VIP
Definitely the best. Im not really a fan of the sequels or the new ones, with the exception of Beneath the Planet of the Apes.
Also, great soundtrack.

The best one, definitely.

Staff member
VIP
And, if one can't be bothered to watch the whole original film......

For me, it works both as enjoyable fantasy and social allegory. Bona-fide classic imo. The Tim Buron remake was an atrocity

It's kinda dopey. The ending is what made it a classic.
E

Hux said:
It's kinda dopey. The ending is what made it a classic.
Click to expand...

The ending of Tim Burton's is what makes it an atrocity. Poor Abe (or should I say, Ape?) Lincoln

I still don't understand the end of Burton's.

He crashed on a parallel universe?
E

No, I think it was Earth as we know it, but the future had been altered. Or something!!

Staff member
VIP
The following is not an explanation, but a collection of excuses....

Much criticism was leveled against the ambiguous ending. Tim Roth, who portrayed General Thade, said "I cannot explain that ending. I have seen it twice and I don't understand anything."

Helena Bonham Carter, who played Ari, said, "I thought it made sense, kind of. I don't understand why everyone went, 'Huh?' It's all a time warp thing. He's gone back and he realizes Thade's beat him there."

Burton claimed the ending was not supposed to make any sense, but it was more of a cliffhanger to be explained in a possible sequel.

"It was a reasonable cliffhanger that could be used in case Fox or another filmmaker wanted to do another movie," he explained
Click to expand...

Well thank goodness for small mercies. It prevented any sequels from happening, so there's that!

The original movie with Charlton Heston is one of the best films ever made and my own personal favourite film! So I can't say enough about it from the great engine sound zooming across the Forbidden Zone (lifted from Irwin Allen's Lost in Space) to the hunt in the corn fields and the trial in the city and finally the revelation that drives Astronaut Taylor mad on the beach at the end! It's just 116 minutes of joy!
JB

"In celebration of the fiftieth anniversary of the 1968 science fiction cult classic film the Planet of the Apes, a handsomely designed commemorative volume full of rich, behind-the-scenes detail and exclusive, never-before-seen photographs and illustrations.

Based on Pierre Boulle’s novel La Planete de Singes, the original Planet of the Apes was one of the most iconic films of the 1960s. Starring Hollywood stalwarts Charlton Heston and Roddy McDowell, the movie captivated audiences and sparked a franchise that included eight sequels, two television series, and a comic strip. Now, five decades after its theatrical release, New York Times bestselling author Jonathan Rinzler tells the thrilling story of this legendary Hollywood classic—a film the book’s author thought would be impossible to make.

With a foreword by Fraser Heston, Charlton Heston’s son, The Complete Making of the Planet of the Apes is an entertaining interactive experience that transports readers to the elusive alternate earth ruled by apes, bringing to life memorable characters such as Cornelius, Zira, Dr. Zaius, and George Taylor, the human astronaut whose fate becomes entwined with their lives. Jonathan Rinzler recreates how some of the greatest talents in Hollywood transformed the French novel to the big screen, drawing on material from a variety of sources, including early publications and interviews, Fox and Warner Bros.’ studio archives, and records from the Academy of Motion Picture Arts and Sciences.

The Complete Making of the Planet of the Apes is illustrated by a wealth of artwork, ephemera, and never-seen-before imagery, including rare journal pages and sketches from Charlton Heston’s private collection, official color and black-and-white photographs, posters, lobby cards, and licensed material and merchandise. Meticulously designed to capture the look and atmosphere of the film, the book contains numerous spreads, each which tells a specific story. This keepsake volume also features exciting, removable interactives.

Comprehensive in scope, The Complete Making of the Planet of the Apes is the definitive look at the original film available and is a must for fans, film buffs, and collectors."