Return Of The Saint -ep 15 The Debt Collectors

Chrissy is in a boat docked at Longwood Marina, looking glum, thinking of Jimmy. Footsteps are heard coming down into the cabin. Gerri enters.
Cr " Gerri?"
G " it's been a long time little sis"
Cr " how did you find me?"
G " that's not important, it's why that matters"
Gerri takes out a gun.
Cr " Gerri I did everything for you, delivered that package for you, lied to protect you"
G " and broke jail to get me. What made you decide getting me was more important than breaking dear Daddy's heart"
Cr " what does it matter now"
G " It doesn't because Chris you're going to keep your mouth shut, and this will shut it for you"
Suddenly the cabin is bathed in light, Templar's taxi has arrived, the headlights bathing the boat in the darkness.
Chrissy makes a grab for the gun, the two sisters fight. Templar rushes in and pulls them apart.
G " Simon, she tried to kill me.."
T " it's over Gerri, I know, Connaught will soon be here and then you'll belong to him"
A little later Connaught arrives, parked his car a little way from the marina for some reason.
Cn " okay Simon I'll take her"
Connaught grabs Gerri by the arm and turns to Chrissy.
Cn " apologies are useless but my department will do everything it can to make up for what's happened to you"
Cr " just make sure my darling sister gets what's coming to her"
Cn " on that you have my personal guarantee. Oh I suppose I should thank you Simon"
T " put it in my file Geoffrey"
Cn " mmm, okay I better get Mata Hari here back to London"
Connaught and Gerri leave.

Connaught is in the back of the car with Gerri, Bradley at the wheel, obviously Connaught didn't want Simon to see and recognise him.
Cn " well I'm waiting"
G " for what, an apology"
Cn " you were supposed to call me if you found her why didn't you"
G " there wasn't time, I had to act or risk Templar getting to her first. Anyway what does it matter now ,we've both had it, sorry darling but if I go down you go down"
Cn " if anyone is going anywhere it's Templar and your loving sister and it's a one way journey. Bradley you know the spot"
Simon is driving behind with Chrissy.
Cr " thank god it's almost over"
T " is it, you didn't break jail just to trap your sister, there's someone else, a traitor"
Cr " yes but Sir Charles never told me who"
T " I know who, the man who came rushing to our aid, Geoffrey Connaught"
Cr " why Connaught?"
T " because Gerri gave him away. I only called him Geoffrey with her, but she who supposedly never met him, called him Mr Connaught"
Cr " that's a bit thin"
T " thick enough to hang him, I bet when I tell Sir Charles he sees it my way"
A little further along the road Simon and Chrissy see a car in a field, on fire, suddenly it explodes.
Cr " oh my God!! Gerri!"
Chrissy jumps out,
T " no Chrissy come back!!"
She runs over to the burning wreck. Bradley comes out of the bushes gun in hand. Templar drives forward straight at Bradley, hits him side on with the passenger door. Bradley out cold, Connaught and Gerri run towards Bradley's gun , lying on the grass.
Templar grabs it first ,
T " don't make me do it Geoffrey, I'd hate to kill an old friend"
Cn " always the gentleman Simon"
T " thank you Geoffrey, Chrissy call the police"

At the Hanson residence Chrissy and Simon have told Mr Hanson the whole story.
H " I understand Mr Templar really I do, I can bare no grudge, it is my country too you know"
T yes, take care sir"
Chrissy shows Templar to the door.
T " take care of him, and yourself too, you've both been through a hard time"
Cr " hard times can be improved, how about dinner tomorrow night?"
T " lovely I'll pick you up at eight"
Templar leaves, outside Sir Charles is getting out of his car.
Sir C " Templar, I'm Sir Charles Meadley"
T " I know who you are, Chris Hanson filled me in on the whole nasty operation."
Sir C " do I detect a note of hostility? "
T " a whole symphony"
Sir C " why, because I used Chris Hanson to force Connaught to show his hand. I'd do it again, using people is necessary in my business"
T " try telling that to Jimmy Wilson's parents"
Sir C " and here I was thinking of asking you to work for MI5 full time "
T " you know what I'd rather do?"
Sir C " what?"
T " forget I ever met you"
With that Templar gets in his car and drives off leaving Sir Charles with a face of thunder.
THE END
Last edited: Sep 13, 2019
M 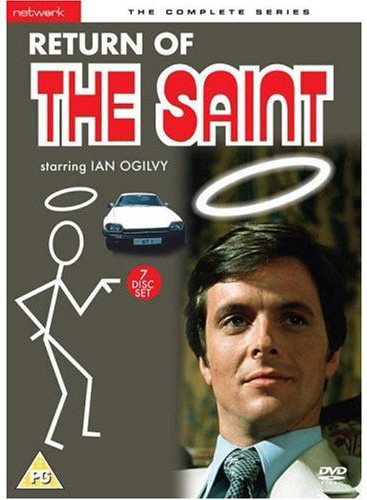 Donald Houston loses it, in The Armageddon Alternative. Great episode.

Seth Grahame-Smith penned the script while Lorenzo Di Bonaventura and Brad Krevoy will produce along with the late Robert Evans posthumously. The story follows Simon Templar (a.k.a. The Saint), a Robin Hood-esque criminal and thief for hire.

Fletcher recently signed on to helm Universal’s “Renfield” about the asylum inmate who is a servant of Dracula.