Review The Ghost of Frankenstein (1942)

When Ygor brings the Monster to Dr. Ludwig Frankenstein for care, Ludwig gets the idea of replacing the Monster's current criminal brain with a normal one.


On to the next FRANKENSTEIN movie......

Staff member
VIP
I think that Lon Chaney Junior was both an obvious, yet dumb choice to play the monster.

The fact that he looks nothing like Karloff seems to have escaped the film-makers' attention and it seems obvious that he was cast simply on his name, rather than any similarity to what had gone before. And yet.....

He does bring something to the role. I cannot quite put my finger on it, but somehow - he works, in his own way.

Maybe it is the sad stillness of this hulking, overlarge brute that the monster has now transformed into...

Or some other quality that is eluding me.

The miming as Ygor scene works for me too.

So, maybe he got the role unfairly, but I am happy to say that I think Chaney worked as the Monster.

Ygor is back, but - perhaps because he is minus those crooked teeth - some edge has gone out of his performance.

The plot is daft in an entertainingly wonderful, way - and musical brains is the new game that these films start to play.

A lightweight, but no less entertaining entry in this remarkable series of films that are clearly of their time and, in my opinion, beyond the ability or understanding of the current DARK UNIVERSE mob of greedy studio film-makers to ever recreate with any genuine success.
Last edited: Sep 22, 2017

Karloff was going to be a tough act for anyone to follow. His face, even covered in make-up, conveyed such pathos. And he seemed to give a performance that presented a misunderstood creature, who only acted violently when pushed to the limit. Cheney works in the role of the silent brute. I love Cheney as an actor, but he wasn't one to emote (ironic given who his father was). A purist would have called Son Of Frankenstein the last of the true Frankie movies, and this part of a different continuity. But it is all the same shared universe, and I agree, he does work. He's not Karloff, he's...different. And he's good at it. I would go so far as to say better than Glenn Strange, who did the job, but didn't really make it his own.

Still, all in all, a pretty fun movie. Bela seems to be having fun playing Ygor.

Ghost of Frankenstein is the one where Igor's brain get's put into the monster and they become one and the same forever, or until the next movie, Frankenstein Meets The Wolf Man where the brain goes to sleep and the monster looks very similar to Igor! The monster lumbering about blind in the finale is where everyone gets the idea that the Frankenstein monster should do that when they are asked to imitate him!
JB

Okay... So what's the deal with Ygor's brain?

We know that it was plonked into the skull of the monster at the end of GHOST OF FRANKENSTEIN.....

And we know that the Monster was supposed to talk in FRANKENSTEIN MEETS THE WOLFMAN, and that it was still Ygor in there..... (admittedly all chopped out by the studio)

The monster is back to being a dumb brute for the remainder of the run....

What happened to Ygor's brain, intelligence - and voice?

The chronology should be this.....


But I get no sense of Ygor being in there during much of the latter half of the run...

Staff member
VIP
I was always gobsmacked that Ygor was able to convince the Monster that swapping brains was a good idea. "Tonight, I, Ygor, will die for you!"

Yeah, while Abbey's brain gets chucked on the compost heap!

Staff member
VIP
Canon or not, we are told who Abbey Normal really was in this Dark Horse paperback, as Frankenstein searches London and finds out who the unwitting donor was....

Will have to dig it out of the attic and read it again...

Following his lab's explosion, Henry and Elizabeth Frankenstein head to London for a rest (and to avoid possible criminal charges). The monster, still alive, follows, but winds up in the Whitechapel district. There, he's mistaken for a disfigured, mentally disabled man and befriended by local prostitutes. When one of the whores is horribly murdered, the creature roams the area, hoping to protect the survivors. This brings him in contact with the real killer-Jack the Ripper. After 47 years, he's back in action. His 1887 slayings (sacrifices) extended his life. Now he's aging again and desperate to remain alive, and sees in the reanimated corpse of the Frankenstein monster a possible new way to live forever. Henry, the monster and Jack the Ripper's fates become entwined as Jack the Ripper hatches a plan to frame the monster for the killings, to force Henry to reveal his secrets of life and death. 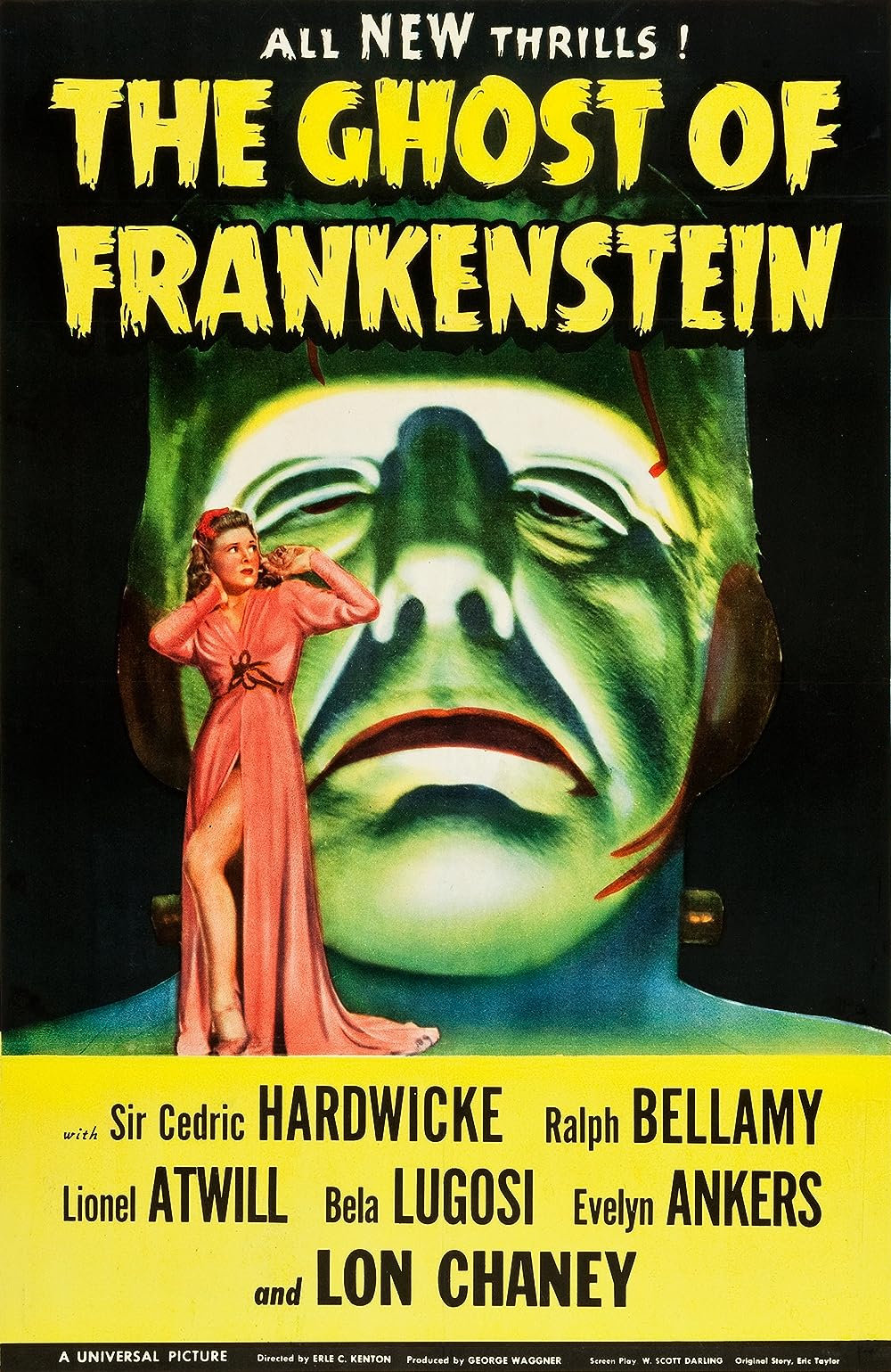 The Ghost of Frankenstein: Directed by Erle C. Kenton. With Lon Chaney Jr., Cedric Hardwicke, Ralph Bellamy, Lionel Atwill. Dr. Frankenstein's plans to replace the brain of his monster are hijacked by his scheming and malevolent assistant Ygor.