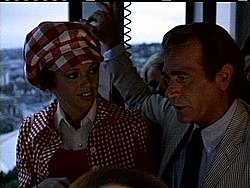 The Night Strangler proved almost as popular as its predecessor garnering strong ratings and eventually prompting ABC to order a TV series (neither writer Richard Matheson nor producer/director Dan Curtis was involved in the TV series). In the United States, the TV movie ran (without commercials) approximately 74 minutes. ABC planned to release the film overseas as a theatrical release and had additional footage shot rounding out the movie to 90 minutes.

In the novelization of The Night Strangler, it is strongly hinted that the immortal villain, Dr. Richard Malcolm, is actually the Count of St. Germain.

When asked directly, Malcolm laughs ironically but does not deny it.

A third film was planned which was based on a story by Richard Matheson but completed by science fiction and horror novelist William F. Nolan (the two share credit on the unproduced script). The third film was set aside when ABC elected to order the TV series and have it produced by Universal (none of the original participants aside from actors Darren McGavin and Simon Oakland appeared in the TV series).

Entitled The Night Killers and set in Honolulu, Hawaii, the script had Tony Vincenzo hiring Kolchak to work for him. Once again, Kolchak discovers a cover-up—this time involving a mysterious UFO, a nuclear power plant and important people being murdered and replaced by androids. Kolchak ties all of this together believing that the aliens on the UFO landed on Earth intending to set up a colony and replacing key government figures with these androids to assist them in their secret colony.[3][4]