At 163 minutes, Denis Villeneuve’s “Blade Runner 2049” is a long film with one of the few criticisms at it being the film’s length. It’s a movie that takes its time with its pacing certainly, but even its sizable final cut is nothing compared to the nearly four hour first assembly cut.

Editor Joe Walker recently sat down for a long interview with Provideo Coaliton and discussed some of the excised footage which he admits likely won’t end up on the disc release:

“Denis doesn’t like deleted scenes on BluRays and I tend to agree. There’s a reason why you chop scenes out and although I respect the fact that there’s some fan interest out there, we wanted to make one definitive cut of Blade Runner 2049.

In reality, there weren’t so many whole scenes to cut because it’s a story that develops piece by piece – remove any substantial piece and the edifice collapses. So we had the challenge of bringing down the length but if you merely cut things faster so that they’re just ‘fast’ then the whole film motors on without the audience.

The right version is the one that allows you time to peer into the souls of the character, interspersed with some very dynamic moments of destructiveness. We were also trying to create a dreamlike quality. There are takes where Ryan walked through the desert faster but the shots that sang this song more clearly were the ones where K slowed his pace.”

He goes on to say a major aerial sequence when K and Joi fly to Las Vegas was cut, while dialogue was whittled down to “the minimum amount you could get away with”. Despite shooting practically whenever possible, the final film still boasts over 1150 VFX shots. He also says the hardest sequence to edit was the hologram-filled Las Vegas showroom:

“This is the scene where Deckard traps K in the nightclub and flips a switch that summons a broken hologram show to life. To gauge the scale of the operation, on that scene alone there were 21 fine cuts, just of the pre-viz. That gave us a solid idea of music for playback and a template for Roger to design his lighting. Denis and the main unit then filmed the scene for real with Deckard and K, with Ben Thompson in the background as Elvis.

They shot old-school without a motion control rig. Then we had a weekend to frantically fine cut this material and then break everything down again so that we could go back to set with the 2nd unit and shoot all the holograms: the Folies Bergere, Elvis’s band, Cowgirls, Gogo dancers, Liberace, Marilyn Monroe, you name it.

We had to get it right because when you cut from one angle to the other, the dancers had to do their high kicks on exactly the same beat whilst staying in sync with lighting effects already shot by Roger. That’s a really complicated thing to achieve, technically. I ended up with dozens of video tracks running for each shot and my temp team set about creating more polished versions.

So when we got back to Los Angeles, soon after Thanksgiving 2016, we sat and watched the First Assembly. Denis said, everything is fantastic, it’s going to work, except one scene: the Hologram Funhouse. We’d been toiling on that on and off for six months so it was disappointing, but I knew he was right. Tonally it didn’t fit, it didn’t feel like Blade Runner.

Denis’ point was that the last time Deckard met a Replicant, it was Roy Batty, who nearly killed him. So this should be full of fear and tension. A manhunt, not a variety act. Deckard turns on those holograms because it gives him an advantage, he knows where and when the light will fall. So Denis and I recut the scene to maximize this and we dumped a lot of the layers of holograms. Really great footage of pole dancers spinning down from the ceiling, all had to go.

I wanted to emphasize the spookiness of this broken machine and I dug around and found some golden moments before “action” where the dancers were waiting for the playback music to start – just breathing, standing by, lit heavily from above. These ended up in the cut. We tried to put in as many dead and broken holograms as living ones.

The big transformation was dumping the music almost entirely. We just had this idea it would be creepier if just one little speaker somewhere in this vast room would suddenly spit out some audio. Theo Green our sound designer worked with me the entire length of the project. He came up with this amazing track of all the lighting units shifting and the crackling of bulbs firing up. That absolutely nailed it. Denis loved the new sequence and it was back in, but at one stage it was so far from the ‘Bladiverse,’ its head was on the guillotine and we were reading it last rites.”

Click the link above for the full interview which has much more. “Blade Runner 2049” is now playing in cinemas everywhere.

Despite the critical acclaim, Denis Villeneuve’s “Blade Runner 2049” notably underwhelmed at the box-office with an opening soft enough that theatrical exhibition stocks plummeted.

Since then there’s been much debate about potential causes for the film’s failure from its long runtime, its marketing approach which played things very vague, and just the general opinion of the “Blade Runner” franchise which has always been a niche movie embraced by cinephiles as opposed to the public at large.

Now, THR reports that Alcon Entertainment and the investors who put their money into the movie are set to lose as much as $80 million on the film. The project had a production budget of $155 million before marketing, which means it needed to earn $400 million worldwide to break even. At present, it stands at just over $240 million in box-office revenue.

Sony is ultimately expected to recoup its $110 million investment in the Alcon production because of the agreement brokered by Sony Motion Picture Group chairman Tom Rothman. It’s thought the film’s losses could be minimized over time if ancillary revenues are particularly strong.

How this will impact Villeneuve’s ambition to adapt “Dune” is unclear at this point.

The buzz was high, the critics swooned, but audiences seemingly cared little for Denis Villeneuve’s “Blade Runner 2049” when the sci-fi sequel opened early last month and promptly sunk at the box-office.

The film effectively wrapped up its theatrical run with $249 million worldwide this month, and only $89 million of that was from the United States. That’s not good for a costly $150 million budget film, and that’s before marketing. As of now, even with healthy home video revenue, the film looks to end up in the red by about $80 million.

Speaking with Yahoo late last week, Villeneuve was asked to make sense of the disappointing box office run and he admits it baffles him:

“I’m still digesting it. We had the best [critics’ reviews]. I’ve never had a movie welcomed like that. At the same time the box office in the United States was a disappointment, that’s true, because those movies are expensive. It will still make tons of money, but not enough. I think because maybe people were not familiar enough with the universe. And the fact that the movie’s long [2 hours, 44 minutes run time]…I don’t know. It’s still a mystery to me. I make movies – I don’t sell them.”

Villeneuve adds however that he is: “at peace with is the fact that the hardcore fans that loved the first movie really welcomed this one… that for me means the world.”

“Blade Runner 2049” appears to have met the same fate as Ridley Scott’s original, bombing at the box office though later becoming a cult classic.

As has been stated before, this could be one of those films that gets a cult following on video. At least, I hope so. It was too good not to.
M

I saw this movie again recently and was still very impressed by it.

I was kind of bummed out that it didn't do better at the box office, but hopefully it does better on DVD!

I heard it was beautiful, but I watched it at a drive in movie theater where the picture just sucked.

Other than a few revelations about Deckert, I found the movie dull and over long.
M

Even though I thought it was a good movie, at well over 2 and a half hours I can't blame anyone for thinking it was too long.

While several actors from Ridley Scott’s original 1982 film “Blade Runner” returned for the Denis Villeneuve-directed sequel “Blade Runner 2049” last year, one notable but understandable absentee was Rutger Hauer whose replicant character Roy Batty died at the end of the first.

Hauer has previously expressed that he didn’t see the point of doing a sequel. Now, speaking at the Berlin International Film Festival, the actor confirmed that he has seen the film but hasn’t changed his opinion on it. He tells THR:

“I sniff and scratch at it. It looks great but I struggle to see why that film was necessary. I just think if something is so beautiful, you should just leave it alone and make another film. Don’t lean with one elbow on the success that was earned over 30 years in the underground.

In many ways, ‘Blade Runner’ wasn’t about the replicants, it was about what does it mean to be human? It’s like ‘E.T.’ But I’m not certain what the question was in the second ‘Blade Runner.’ It’s not a character-driven movie and there’s no humor, there’s no love, there’s no soul. You can see the homage to the original. But that’s not enough to me. I knew that wasn’t going to work. But I think it’s not important what I think.”

Hauer also spoke about the movie industry in general and memorably says: “I look for hard balls. And I don’t see much balls in most films today.” He also mentioned one project he turned down that, looking back on it he’d wish he’d been a part of, was “Das Boot”. However if he had taken it, he wouldn’t have been able to do “Blade Runner”.

Mad_Monster_Party said:
Even though I thought it was a good movie, at well over 2 and a half hours I can't blame anyone for thinking it was too long.
Click to expand...

I miss the days when a decent length film came with an overture, an intermission and exit music.

Though the critics loved it, Denis Villeneuve’s “Blade Runner 2049” was a straight-up disappointment at the box-office. Costing $300 million to make and market, the film earned a total of just $92 million in the U.S. and $259 million worldwide.

Now though, research outlet The Numbers reports that the film has been quietly pulling in very impressive numbers in home video sales. Released on DVD at Christmas and Blu-ray mid-January, the film has sold $3.8 million worth of DVDs and $18 million Blu-rays so far.

Well, apparently some folks have no taste.

chainsaw_metal1 said:
Well, apparently some folks have no taste.
Click to expand...

I think they're also known as "the general public"... 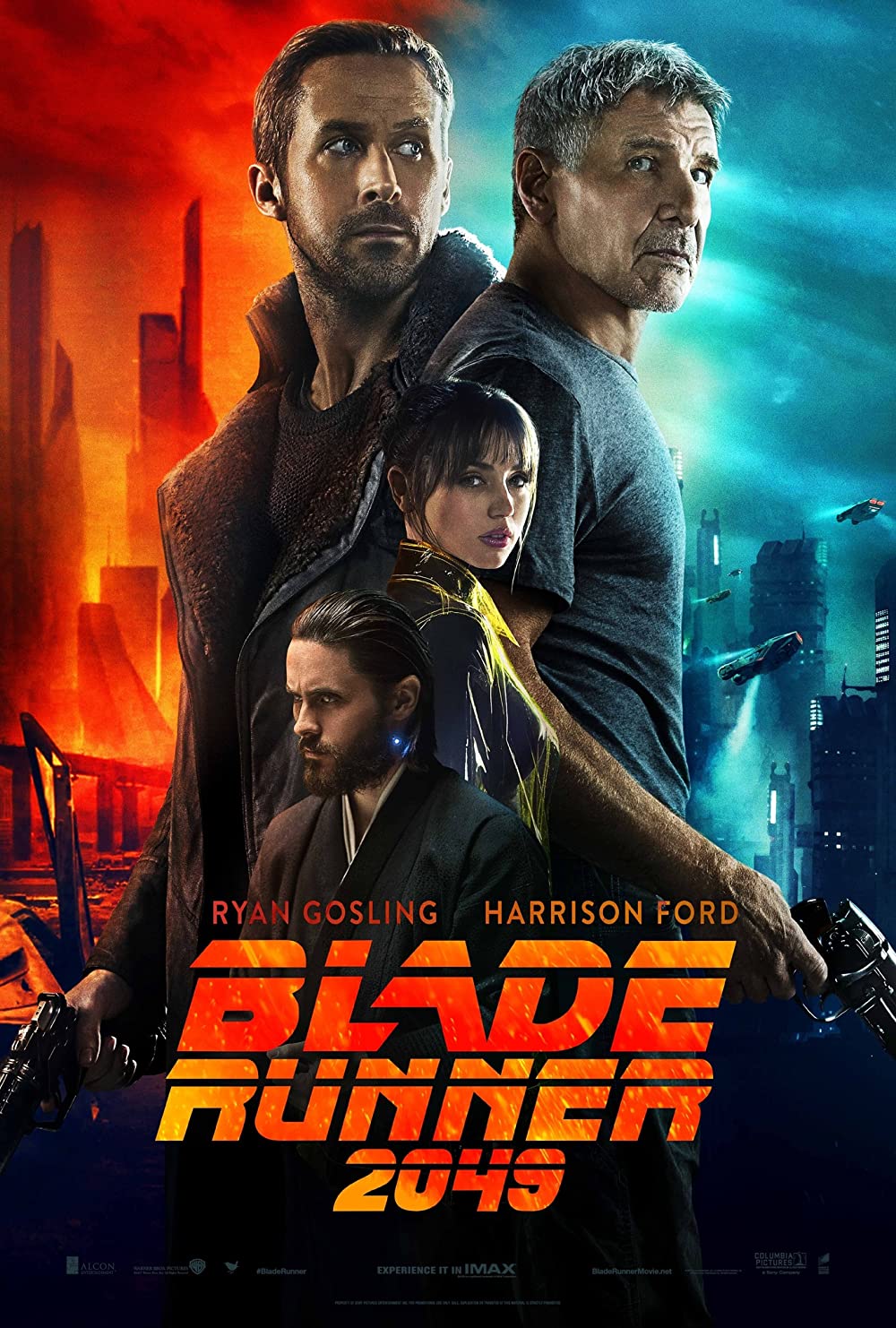