The Carry On series contains the largest number of films of any British series, and it is the longest continually running UK film series, although with a fourteen-year break (1978–92). Anglo Amalgamated Film Distributors Ltd produced twelve films (1958–66), the Rank Organisation made eighteen (1966–78) and United International Pictures made one (1992).

Producer Peter Rogers and director Gerald Thomas made all 31 films, usually on time and to a strict budget, and often employed the same crew. Between 1958 and 1992, the series employed seven writers, most often Norman Hudis (1958–62) and Talbot Rothwell(1963–74). In between the films, Rogers and Thomas produced four Christmas specials in 1969, 1970, 1972, and 1973, a thirteen episode television series in 1975, and various West End stage shows which later toured the regions.

All the films were made at Pinewood Studios near Iver Heath, Buckinghamshire. Budgetary constraints meant that a large proportion of the location filming was undertaken close to the studios in and around south Buckinghamshire, including areas of Berkshire and Middlesex. However, by the late 1960s (at the height of the series' success) more ambitious plots occasionally necessitated locations further afield, which included Snowdonia National Park, Wales, (with the foot of Mount Snowdon standing in for the Khyber Pass in Carry On Up the Khyber), and the beaches of the Sussex coast doubling as Saharan sand dunes in Follow That Camel.


Filmography
Main article: Carry On series on screen and stage

One of the most visually impressive Carry on films but not all that funny.

Charlie was clearly the worse for wear in this very rare interview from around 1984, which has been heavily edited by the broadcaster due to the Carry On star's drunken behaviour. The interview is therefore very short and sweet.
Click to expand...

Staff member
VIP
Whatever the all-too human flaws of some of the cast, the comedy gold that they spun can never be recreated, as CARRY ON COLUMBUS proved.

Several other films were planned, scripted (or partly scripted) or entered pre-production before being abandoned:

Carry On Spaceman was to be released shortly after Carry On Regardless, in 1961. It was scripted by Norman Hudis, and was to satirise interests in the Space Race from the Western world's point of view. The cast was to consist of three would-be astronauts who constantly bungled on their training and their mission into outer space – most likely the trio would have been played by the trinity of Kenneth Williams, Kenneth Connor, and Leslie Phillips that had been established in Carry On Constable.

Attempts to revive Carry On Spaceman in 1962 under Denis Gifford, again by Hudis, failed, and the project was subsequently abandoned.

Three scripts were written for an intended sub-sequel to the successful Carry On Nurse, the second installment of the Carry On series. The first film was renamed, and the other two never made.

The first intended Carry On Again Nurse was made in 1967, but released as Carry On Doctor.[14] Carry On Nurse was alluded to twice in Carry On Doctor, firstly with the sub-titles (one reading Nurse Carries On Again and Death of a Daffodil), and again in a later scene with Frankie Howerd commenting on a vase of daffodils in his ward.

A second attempt at Carry On Again Nurse came in 1979, after the series left Rank Films and moved to Hemdale. A completed script had been written by George Layton[15] and Jonathan Lynn in 1977. It was cancelled due to the financial loss of Carry On Emmannuelle.

The final attempt to create Carry On Again Nurse came in 1988, with a script written by Norman Hudis[16]. It was to revolve around a hospital set for closure, and set to star original actors Barbara Windsor, Jack Douglas, Kenneth Williams, Charles Hawtrey, Kenneth Connor and Joan Sims, with Sims filling in the role of matron that was previously held by Hattie Jacques. The end of the film was going to be a tribute to Jacques, with Sims turning around a photograph of the actress and asking "Well, did I do alright?" (the script is included in the book The Lost Carry Ons). Production was scheduled to begin in June 1988, but the deaths of Williams and Hawtrey (in April and October 1988 respectively), combined with a budget of £1.5 million which was deemed too expensive, proved to be the end of the film and it was cancelled.


In 1987 several of the team were confident enough in a comeback to go on TVAM and promote the upcoming CARRY ON TEXAS....

A new film, Carry On London, was announced in 2003 by producer Peter Rogers and producer James Black but remained in pre-production well into 2008. The script was signed off by the production company in late March 2008, and "centred on a limousine company ferrying celebrities to an awards show."[18] The film had several false starts, with the producers and cast changing extensively over time. Only the rather unknown Welsh actress Jynine James remained a consistent name from 2003 to 2008.[19] Danniella Westbrook, Shaun Williamson and Burt Reynolds were also once attached to the project. In May 2006 it was announced Vinnie Jones and Shane Richie were to star in the film, which was to be directed by Peter Richardson, though Ed Bye later replaced him as the named director.[20] At the 50th anniversary party held at Pinewood Studios in March 2008, Peter Rogers confirmed that he was planning a series of Carry On films after London, subject to the success of the first.

In early 2009, Carry On London or Carry On Bananas was once again 'back on', with Charlie Higson attached as director, and a different more modern cast list involving Paul O'Grady (as the acidic Kenneth Williamsesque character), Jynine James, Lenny Henry, Justin Lee Collins, Jennifer Ellison (as the saucy Barbara Windsor type), Liza Tarbuck (Hattie Jacques), Meera Syal, James Dreyfus, and Frank Skinner (filling in the Sid James role). Despite new media interest and sets being constructed at Pinewood film studios, the film once again was put on hold, and the project was shelved after the death of Peter Rogers in April 2009.

In May 2016, producer Jonathan Sothcott of Hereford Films announced plans for a new series of Carry On films, beginning with Carry On Doctors and Carry On Campus. As of early 2017 no news has surfaced on if the planned reboot is still going ahead. On April 12, 2017 Jonathan Sothcott confirmed to thehollywoodnews that he is no longer involved with the film series.

Shame really but all they want to do these days is breathe new life into old movies or franchises with limited results! Carry On's were great but were of their time and it was a mistake to return to them with the 1992 film! Even if Jim Dale, Jon Pertwee and whoever else from the originals was in it, it still sank without a trace!
JB

Staff member
VIP
Yes, agreed. They can never recapture the CARRY ON franchise. I bet they will try again in future though - as insane as that is.

Why not try something else? Do a new series of films based on this PC madness that has been shoved down our throats! The saucy postcard mentality of the seventies is long gone and heavily sneered upon by the so called leaders of this society! I'll always love it myself and the gags of that era and the scantily clad girls on the beaches!
JB


A 1987 interview from BBC Breakfast Time to promote the next Carry On film "Carry On Again Nurse". The film was never made.
Click to expand...

The EastEnders and Carry On actor Dame Barbara Windsor has been diagnosed with Alzheimer’s disease, her husband has revealed.

Scott Mitchell said Windsor, 80, had kept the news secret since they were first told four years ago, but that her symptoms had grown worse in recent weeks.

In an interview with the Sun, Mitchell said he wanted to set the record straight because rumours had been circulating about her deteriorating health.

“Since her 80th birthday last August, a definite continual confusion has set in, so it’s becoming a lot more difficult for us to hide,” he said. “I’m doing this because I want us to be able to go out and, if something isn’t quite right, it will be OK because people will now know that she has Alzheimer’s and will accept it for what it is.”

Windsor, who is famous for her roles in nine Carry On films and as pub landlord Peggy Mitchell in BBC soap EastEnders, was given the diagnosis in 2014.

After shedding some tears, her first words were “I’m so sorry”, Mitchell said.

A small circle of friends who had begun to notice her occasional confusion had been told shortly after her diagnosis, he said, but he had stopped the news from going public because Windsor was struggling to come to terms with it.

Mitchell said he had first noticed symptoms of the condition in 2009, just before Windsor left EastEnders for the first time, when she began having difficulty learning her lines.

She underwent a series of mental agility tests, a brain scan and a lumbar puncture before the couple’s fears were confirmed. By 2016, her forgetfulness and confusion were getting worse, and it was agreed she would leave EastEnders for good, he said.

She has now retired from charity work as well as acting, he said.

Sounds bad! But why would she require a lumber punch for that condition? My wife had one when our first child was being born and she still suffers from it today!
JB

I've been watching quite a few Carry Ons lately and am just getting to the scantily clad stage! My children have no interest in them at all which is sad but when you think the jokes are so outdated now it's not really that surprising!

johnnybear said:
I've been watching quite a few Carry Ons lately and am just getting to the scantily clad stage! My children have no interest in them at all which is sad but when you think the jokes are so outdated now it's not really that surprising!

They might be out dated, but they still make me giggle.

And my lad enjoyed them when he was younger.

Well I mean some of the people or things they quote in the films are a dig at things going on at the time and mean nothing to young people today especially when you have to tell them the person they're talking about died some forty five years ago! The only Carry On my daughter ever liked was Screaming any way for some obscure reason!
JB 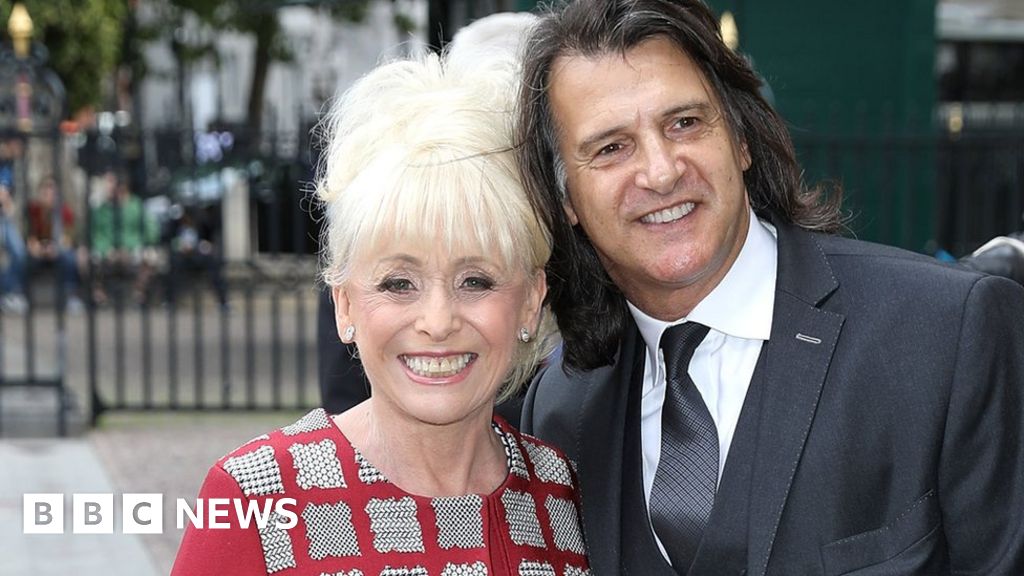 Dame Barbara Windsor 'may have to move into care home'