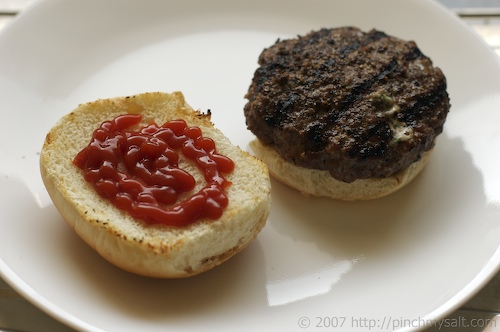 I like mine plain with just a little A1 steak sauce. But, unlike my charred hotdog, my burger CANNOT be charred. Medium-rare is good for me. Of course that's providing the ground meat is of a good
grade quality◆◆◆

I'll take a hamburger any way you make it. If were simply grilling, then medium rare, ketchup, mustard, and an onion slice fresh from the grill (if you've never grilled onion, you don't know, man, you just don't know). But I love just about anything you can put on a burger. There's a restaurant here in Iowa called Zombie Burger (burgers named after zombie movies and TV shows), and they do some amazing creations. I had one that had fried cheese curds and chicken fried bacon on it. And they have bottles of sriracha on every table, to be drizzled all over the incredible fries they have there.

But of the two you have pictured, I would prefer the second.

But, unlike my charred hotdog, my burger CANNOT be charred. Medium-rare

I can handle a charred hotdog but not this: 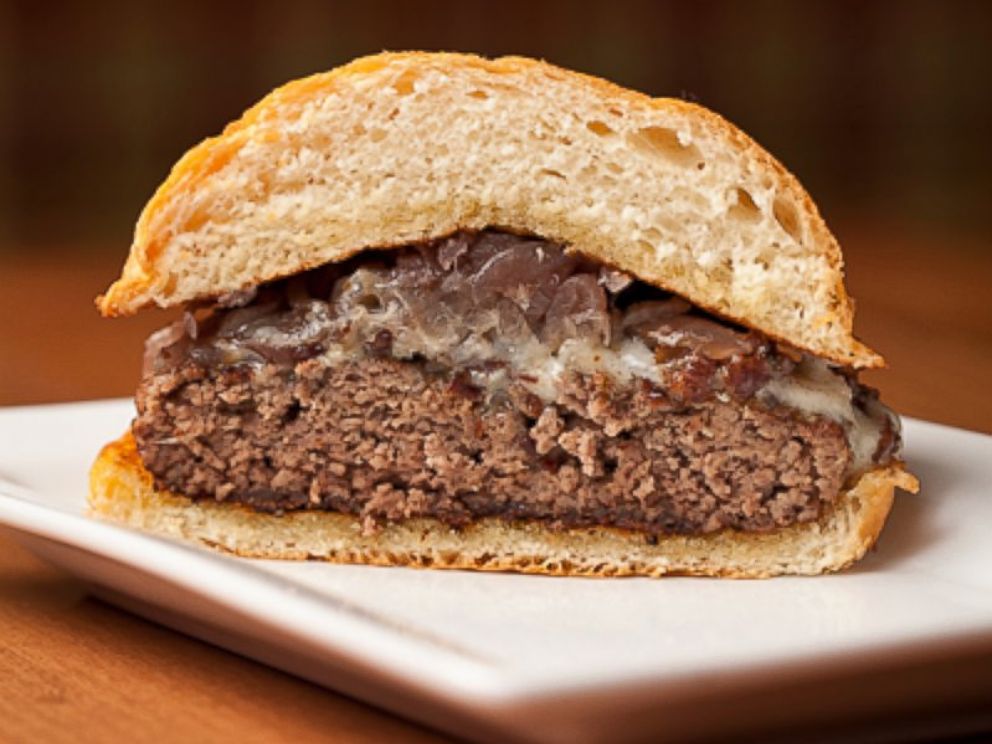 Hunter28 said:
But, unlike my charred hotdog, my burger CANNOT be charred. Medium-rare

I can handle a charred hotdog but not this:

I dunno. That first burger with the cow juice running out looks pretty damned tasty to me. But I also eat my steak half raw, so I might not be the best judge.

Still, sopping up cow juice with a piece of bread and butter at the end of a meal? Delicious!

Steak can be rare because the bacteria is on the surface and gets killed but burger meat is mixed up meaning you have to cook it all the way through.

Ergo... scorch it to buggery, please. Then stack it high.

I'll take my chances. Danger is my middle name.

chainsaw_metal1 said:
I dunno. That first burger with the cow juice running out looks pretty damned tasty to me. But I also eat my steak half raw, so I might not be the best judge.

Still, sopping up cow juice with a piece of bread and butter at the end of a meal? Delicious!
Click to expand...

VIP
I like a burger medium well with a little bit of blood/juice in the center cooked on the grille, with onion, ketchup, mustard, relish, and cheese on the bun. Sides are anything from chips, fries, or different salads.

Now @Hux has mentioned steak may I remark that I'd happily go veggie for a 3 day stretch to work up to a proper medium rare rump steak with no nonsense about it.

Fellow Brits of a certain age may remember when burgers were had at Wimpey bars, and failed entirely to seize the childish imagination. My dad, who was a tool fitter often working on food preparation machinery, had very few food dislikes except sliced bread and mechanically minced meat (because he built bread slicers and meat mincers and knew the inside story). On the other hand, the week his factory got the contract for making metric sized Mars bars with Arabic on the wrappers, we chomped ourselves senseless on "failed trial" chocolate he brought home. He did like mum's home-made rissoles, made of leftover roast, that she minced with a gadget you clamped to the kitchen table and hand-cranked.

VIP
I like my burger with sour cream, caugamole, onions, bacon, cheese and a fried egg.

But a simple Dutch cheap music festival burger with mayo and curry is also doable.

They are very good with cheese, sauteed onions and mushrooms. A little salt and pepper.

I think you will like it. Went to a small party and the host was grilling hamburgers. He told me to try this topping. It did not look so good but I thought why not. So glad I did. I was not leaving without the recipe. LOL. I had never heard of it. Its called bacon jam. He said you can buy it in some stores but he makes his own He printed out the recipe for me. Here it is.

Cook the bacon in a saucepan over medium heat (slow and low) until most of the fat has been rendered. Remove bacon from the pan, allow to drain on paper towels.

Pour out all but about 1 tablespoon of the bacon grease, add 1 tablespoon olive oil and the chopped shallots. Cook, stirring occasionally, over medium-low heat until shallots are caramelized, about 30 minutes or so.

Add the bacon, balsamic, brown sugar, black pepper and water to the pan, stir to combine.

Simmer over medium low heat until the jam has thickened, about 20 minutes.

Add to a food processor and puree until desired level of smoothness (some people prefer the jam chunkier, others smoother). Store in the fridge until ready to use, heat slightly before serving. @Hunter28
Looks very tasty. I'm always up for trying new things. Might give it a try this summer.
Another strange cooking idea I discovered a few summers ago was while cooking chicken thighs on the grill, I skin them first, then slather Mayo on the thighs. Cook on 1 side & turn, then slather the other side. It doesn't matter if the Mayo is regular or low-fat. Very, very tasty.
Great picture

I've never tried one, but the look of them isn't overly appealing to me. Maybe one day...

chainsaw_metal1 said:
I've never tried one, but the look of them isn't overly appealing to me. Maybe one day...
Click to expand...

It all depends on the recipe... Don't ever trust the ones that are processed... They taste like crap.
S