Please post and discuss the life and career of Tony Hancock here...

Hancock's Half Hour was a BBC radio comedy, and later television comedy series, broadcast from 1954 to 1961 and written by Ray Galton and Alan Simpson.

Comedian Tony Hancock starred in the show, playing an exaggerated and much poorer version of his own character and lifestyle, Anthony Aloysius St John Hancock, a down-at-heel comedian living at the dilapidated 23 Railway Cuttings in East Cheam.

The series was influential in the development of the situation comedy, with its move away from radio variety towards a focus on character development.

The radio version was produced by Dennis Main Wilson for most of its run.

After Main Wilson departed for his television career, his role was taken by Tom Ronald.

The television series was produced by Duncan Wood.

The distinctive tuba-based theme tune was composed by Angela Morley, then known by her original name, Wally Stott.

Terry Nation also did some work for Tony Hancock early in his career.

After watching 12 Angry Men again, starring Henry Fonda, I ended up watching the Hancock spoof version of it, with Sid keeping the jury's deliberations going for as long as possible simply to make money.

The proof of it's quality is indicated by the BBC trying to wipe as many episodes as they could.

At least they are consistent!

Doctor Omega said:
After watching 12 Angry Men again, starring Henry Fonda, I ended up watching the Hancock spoof version of it, with Sid keeping the jury's deliberations going for as long as possible simply to make money.

The proof of it's quality is indicated by the BBC trying to wipe as many episodes as they could.

At least they are consistent!

Well, I can't comment on the spoof, or the BBC's policy of wiping TV series - actually, I can, but later - however I can comment on the 1957 film 12 ANGRY MEN. I generally like courtroom dramas to begin with, but this one is absolutely terrific. The ensemble cast is simply brilliant and they each bring something special to the final production.

ant-mac said:
however I can comment on the 1957 film 12 ANGRY MEN. I generally like courtroom dramas to begin with, but this one is absolutely terrific. The ensemble cast is simply brilliant and they each bring something special to the final production.
Click to expand...

I totally agree! One of my all time favourite films. And now you can even get to vote on whether there was a miscarriage of justice or not in that film!

Doctor Omega said:
I totally agree! One of my all time favourite films. And now you can even get to vote on whether there was a miscarriage of justice or not in that film!

Yes, I had noticed.

However, before I vote, I really should view the film again, just to make sure I vote correctly.

Just for research purposes you understand...

I know what you mean. I used the thread as an excuse just to watch it again, which then led me to Hancock! 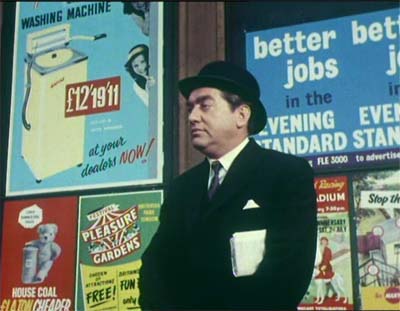 The Rebel (US title: Call Me Genius) is a 1961 satirical comedy film about the clash between bourgeois and bohemian cultures. Starring the British comedian Tony Hancock, it was written by Ray Galton and Alan Simpson. The film was made by Associated British Picture Corporation and distributed by Warner-Pathé (ABPC's distribution arm).

The Rebel attempts to transfer Hancock's TV comedy persona to the big screen, and several of his regular supporting cast also appeared, including John Le Mesurier, Liz Fraser and Mario Fabrizi. Although the film was the sixth most popular movie at the British box office for 1961, it was not well received in the USA, where audiences possibly did not understand the highly anglocentric humour.[1] Hancock though was nominated for a BAFTA Film Award in 1962 as Most Promising Newcomer to Leading Film Roles:

The film explores existentialist themes by mocking Parisian intellectual society and portraying the pretensions of the English middle class. Galton and Simpson had previously satirised pseudo-intellectuals in the Hancock's Half Hour radio episode "The Poetry Society", in which Hancock attempts to imitate the style of the pretentious poets and fails, and is infuriated when his idiot friend Bill does the same and wins their enthusiastic approval.

The film also includes scenes parodying modern art. The scene showing Hancock splashing paint onto a canvas and riding a bike over it is a lampoon of the work of Action Painter, William Green while the childlike paintings of Hancock, referred to as the 'infantile school' or the 'shapeist school' parody the naive style.

The railway station used at the beginning of the film named Fortune Green South, was actually Bingham Road in the Croydon suburb of Addiscombe. The station has now been demolished.

In 2002, the London Institute of 'Pataphysics organised an exhibition consisting of recreations of all the art works seen in the film and presented the exhibition as if it were a retrospective of a real unknown artist called Anthony Hancock.

The only known clip from his itv series.....

It was Episode 2 - shown 23/6/1967 I believe - and it appears to be part of a hone recording recovered by video expert Terry Martini...I'm told that other sequences exist but I have never seen them. John Foster's book on Hancock says that "only the merest fragments survive". - I think after nearly 50 years this is the only fragment.
Click to expand...

In June and August 2009, six off-air audio recordings of lost TV episodes from Series 4 were unearthed, though they had been knocking around the bootleg market for some time; however, two of them are very poor quality.

The six episodes were:

"Underpaid or Grandad's S.O.S.",
"The Flight of the Red Shadow",
"The Horror Serial",
"Matrimony – Almost",
"The Beauty Contest"
"The Wrong Man".

In 1958 Tony Hancock was riding high as the star of Hancock’s Half Hour, which was running on both BBC television and radio.

On the evening on the 9th of February 1958 he gave a rare straight acting performance in the BBC World Theatre production of Gogol’s The Government Inspector.

Hancock was bolstered by an impressive supporting cast (including Wilfred Brambell, Peter Copley and Noel Howlett) and he acquitted himself well – although he’s still recognisably Hancock. Indeed, it would be easy to believe that some of his lines were written by Galton & Simpson, which is possibly why it was felt that this play would be a perfect fit for him.


In early 1960, Hancock appeared on the BBC's Face to Face, a half-hour in-depth interview programme conducted by former Labour MP John Freeman. Freeman asked Hancock many searching questions about his life and work. Hancock, who deeply admired his interviewer, often appeared uncomfortable with the questions, but answered them frankly and honestly. Hancock had always been highly self-critical, and it is often argued that this interview heightened this tendency, contributing to his later difficulties. According to Roger, his brother, "It was the biggest mistake he ever made. I think it all started from that really. ...Self-analysis - that was his killer."

Cited as evidence is his gradual ostracism of those who contributed to his success, such as Sidney James and his scriptwriters, Galton and Simpson. His reasoning was that, to refine his craft, he had to ditch catch-phrases and become realistic. He argued, for example, that whenever an ad-hoc character was needed, such as a policeman, it would be played by someone like Kenneth Williams, who would appear with his well-known oily catchphrase 'Good evening'. Hancock believed the comedy suffered because people did not believe in the policeman, knowing it was just Williams doing a funny voice.


Programme website: http://bbc.in/2cjIrJr Tony Hancock calls for help and is very disappointed when Kenneth Williams turns up.
Click to expand...