The Starlost is a Canadian-produced science fiction television series created by writer Harlan Ellison and broadcast in 1973 on CTV in Canada and syndicated to local stations in the United States. The show's setting is a huge generational colony spacecraft called Earthship Ark, which has gone off course. Many of the descendants of the original crew and colonists are unaware, however, that they are aboard a ship. The series experienced a number of production difficulties, and Ellison broke with the project before the airing of its first episode.

Harlan Ellison was approached by Robert Kline, a 20th Century Fox television producer, to come up with an idea for a science fiction TV series consisting of eight episodes, to pitch to the BBC as a co-production in February 1973.[1] The BBC rejected the idea.[2] Unable to sell The Starlost for prime time, Kline decided to pursue a low budget approach and produce it for syndication. By May, Kline had sold the idea to 48 NBC stations and the Canadian CTV network.

To get Canadian government subsidies the production was shot in Canada and Canadian writers produced the scripts from story outlines by Ellison.

Before Ellison could begin work on the show's production bible, a writers' strike began, running from March 6 to June 24.[3] Kline negotiated an exception with the Writer's Guild, on the grounds that the production was wholly Canadian — and Ellison went to work on a bible for the series.

Originally, the show was to be filmed with a special effects camera system developed by Doug Trumbull called Magicam. The system comprised two cameras whose motion was servo controlled. One camera would film actors against a blue screen, while the other would shoot a model background. The motion of both cameras was synchronized and scaled appropriately, allowing both the camera and the actors to move through model sets. The technology did not work reliably. In the end, simple blue screen effects were used, forcing static camera shots.

The failure of the Magicam system was a major blow — as the Canadian studio space that had been rented was too small to build the required sets. In the end, partial sets were built, but the lack of space hampered production.

As the filming went on, Ellison grew disenchanted with the budget cuts, details that were changed, and what he characterized as a progressive dumbing down of the story. Ellison's dissatisfaction extended to the new title of the pilot episode; he had titled it "Phoenix Without Ashes" but it was changed to "Voyage of Discovery".

Before the production of the pilot episode was completed, Ellison invoked a clause in his contract to force the producers to use his alternative registered writer's name of "Cordwainer Bird" on the end credits.

Sixteen episodes were made. Fox decided not to pick up the options for the remainder of the series.

On March 31, 1974, Ellison received a Writers Guild of America Award for Best Original Screenplay for the original script (the pilot script as originally written, not the version that was filmed). A novelization of this script by Edward Bryant, Phoenix Without Ashes, was published in 1975; this contained a lengthy foreword by Ellison describing what had gone on in production. In 2010 the novel was adapted in comic book form by IDW Publishing.

Bova, in an editorial in Analog Science Fiction (June 1974) and in interviews in fanzines, made it clear how disgruntled he had been as science adviser. In 1975, he published a novel entitled The Starcrossed, depicting a scientist taken on as a science adviser for a terrible science fiction series.


The Starlog Photo Guidebook TV Episode Guides Volume 1 (1981) listed two additional episodes: "God That Died" and "People in the Dark". It is not known if these are two unaired episodes, unfinished episodes, or scripts that never got filmed. They do not appear on the DVD collection.

Episodes of the original series were rebroadcast in 1978 and further in 1982. A number of episodes were also edited together to create movie-length installments that were sold to cable television broadcasters in the late 1980s.

Doctor Omega said:
Before the production of the pilot episode was completed, Ellison invoked a clause in his contract to force the producers to use his alternative registered writer's name of "Cordwainer Bird" on the end credits.
Click to expand...

Harlan was going to do this with THE CITY ON THE EDGE OF FOREVER too, but Rodenberry went apeshit and threatened to ruin Harlan in Hollywood, so Harlan backed down.

I have never yet to see a full episode of THE STARLOST. 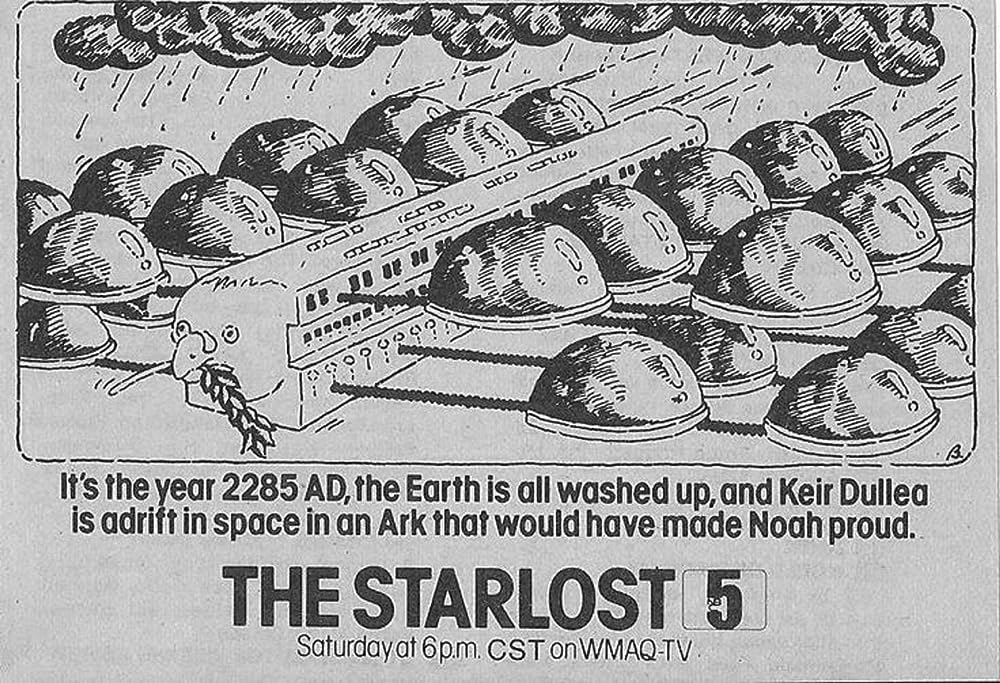 The Starlost: Created by Harlan Ellison. With Keir Dullea, Gay Rowan, Robin Ward, William Osler. A group of humans must explore a vast starship in order to find the controls to save it from destruction.

Doctor Omega said:
Harlan was going to do this with THE CITY ON THE EDGE OF FOREVER too, but Rodenberry went apeshit and threatened to ruin Harlan in Hollywood, so Harlan backed down.
Click to expand...

He created a franchise like STAR TREK and got Harlan Ellison to back down in an argument...?

Was there nothing that man couldn't do?