Thoughts on this popular show - in it's various incarnations?

I love the original series and look forward to the marathon every year. I don't mind the different remakes either. This is one of my favorite ones.

I love the original. There have been some really good episodes of the various revivals, but I think sometimes the revivals try too hard. What was great about the original was that Serling used a genre television program to comment on social conditions, which is something that had been done for years. But he had an opportunity to do something very original and creative with it, and in the process, created new TV tropes. A jaded, younger audience can look at older episodes and complain about how it all seems old hat and done already, but at the time, it was fresh. Now, I think, writers are trying to be creative and find a way to do what Serling did, but there's little room to say something fresh in that arena.

I'd love to see a (good) remake or something similar. He'll, I'd even take a Tales of the Unexpected remake. 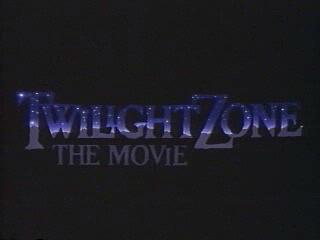 This movie ended up in a major real-life tragedy and a court case...

But how does it stand up as a movie now?

And should they have released it with the Vic Morrow segment at all?

It also had a memorable opening...

I liked it as a kid. I re-watched it a year or so ago, and I really disliked it. The Lithgow segment was too over the top, where the original played more subtly (and that's saying something, since Shatner was the one witnessing the sabotazhe). The Vic Morrow segment is great, but yes, it feels wrong watching it knowing the real life outcome.

But yes, what a memorable opening.

After watching some documentaries on Netflix, I re-watched "Deaths-Head Revisited" from season three, one of my favorite episodes. The story is not only great horror, but the narration by Serling is fantastic. It absolutely drives home a message that is still important today, that we can't forget what happened then, especially when so many are trying to bring back the thinking of the Nazis, and more try to deny that the Holocaust happened.

I was watching some guy so a review of this episode on YouTube, and he was complaining that the episode wasn't entertaining, and that Serling's ending narration was "preachy". Somehow, I think the message was lost on him.

I just remembered an episode (I don't actually think it was the Twilight Zone or the Outer Limits... I'm pretty sure it was actually an Alfred Hitchcock presents... an 80's remake).


It was about a woman in prison who tried to think of a way to escape. She befriended the prison gravedigger and eventually they came up with a plan so that when the next prisoner died, she would get in the coffin with the body and once it was buried outside prison grounds, the gravedigger would come back and dig her out.

So she's in the coffin, waiting.

There's no sign of the gravedigger and she's getting worried. She gets curious and lights a match to look at the body of the person whose coffin she's in.

She sees the gravedigger.

That sounds very familiar, but I don't know if I'm thinking of that episode or
an old comic book story where a prisoner gets help escaping by using a drug that paralyzes him and slows his heartbeat to appear dead. He is buried, all the while aware of what is going on. Before the drug wears off, he hears someone digging him up, and realizes it's grave robbers. They take him to some doctors who are about to dissect him, to his horror. They are taken from the work, and the drug wears off. He gets off of the table and runs, only to find out that the grave robbers brought him to doctors who work inside the prison that he had escaped from. I can't remember if it was from a TALES FROM THE CRYPT reprint or HOUSE OF MYSTERY.

Batty said:
I love the original series and look forward to the marathon every year. I don't mind the different remakes either. This is one of my favorite ones.
Click to expand...

Thanks for sharing this. I had read about this sequel, but never seen it until now.

Christine Lavaf (“I’Human”) has been brought onboard to pen the screenplay for the sci-fi tentpole “The Twilight Zone” at Warner Bros. Pictures.

Based on the iconic sci-fi anthology series which ran from 1959 to 1964, and was previously adapted into an anthology feature in 1983, the news marks the first major development on the project in four years.

In the works for nearly a decade, at last report Joseph Kosinski was in talks to helm while the likes of Anthony Peckham, Rand Ravich and Joby Harold have all taken shots at the script.

Leonardo DiCaprio and Jennifer Davisson Killoran will produce through their Appian Way banner.

Twilight Zone Movie Finds Its Writer…and a New Format. Will It Work?

The Twilight Zone still stands as one of the best sci-fi/fantasy offerings of all time, and its original episodes still manage to be relevant today. So, it’s no wonder that there have been several attempts at adaptation. Now, there’s a new one in the works, and the project has just hired its writer!

Warner Bros. has hired Christine Lavaf to write the screenplay for an unusual take on a Twilight Zone reboot.

Rather than create a new Twilight Zone series, as was done by CBS in the 1980s and UPN in 2002-03, or do an anthology-style movie like John Landis did in 1983 in which four different stories were told by different directors, Warner Bros. has hired Lavaf to write one single story as a feature-length film.

This project has been in development since 2009, and has seen both writers and directors come and go. As of right now, there is no director attached to Lavaf’s script.

Lavaf is a veteran of Warner Bros.’ MonsterVerse — the cinematic universe pitting giant mutant monsters like Godzilla, King Kong and Mothra against each other — contributing recently to the Godzilla 2 writer’s room. Her experience with the horror sci-fi genre will lend to her work with The Twilight Zone, whose eerie blend of fantasy, horror, and science-fiction in its 1959-1964 run was revolutionary.

The original Twilight Zone was a series of disconnected stories and cautionary tales, usually with a surprising twist at the end. The show was very much Serling’s vision, who executive produced, wrote or co-wrote 92 of the show’s 156 episodes, in addition to the stirring narration for which he was famous.

The series has been revived twice, with CBS in the 1980s and UPN in 2002-2003. John Landis directed a 1983 feature film adaptation of The Twilight Zone, which was comprised of four different storylines from several directors. Warner Bros. newest project will likely be the first adaptation to try to forego the series’ famous anthology series format in favor of a single story.
Last edited: Sep 2, 2017

I think that they are missing the point, maybe?

Staff member
I'm not even sure if I can be bothered to post a reply to this latest bit of unimaginative bullshit from Hollywood...

Actually, upon further reflection, I can't.

CBS has announced plans to revive their classic sci-fi anthology series “Twilight Zone” to air on their CBS All Access streaming service. “Get Out” director Jordan Peele’s Monkeypaw production company will produce while “Sons of Anarchy” and “Marvel’s The Defenders” producer Marco Ramirez will pen the script and serve as showrunner.

CBS chief Leslie Moonves made the announcement today about the return of the Rod Serling-created series which ran for five seasons on CBS from 1959-1964. The property created numerous standalone stories with some famously entering the cultural lexicon including “To Serve Man” and “Nightmare at 20,000 Feet”.

In terms of original programming this year, the streamer is offering the high-profile “Star Trek: Discovery,” the ‘Good Wife’ spin-off “The Good Fight,” and the upcoming remake of the Aussie comedy “No Activity” along with access to a lot of CBS’ back catalogue of shows.

They did such a good job with Star Trek Disovery.

I wonder what innovative ways they can think of to **** up Serling's show?

The original is still the best, and will never be equaled. The movie was watchable, but not great. There were some decent episodes of the 80s series, but again, it paled in comparison. And I only watched one episode of the 21st century reboot, which was about a time traveler sent back to kill Adolph Hitler as an infant, which magnificently backfires. Great episode, but again, these shows just can't hold a candle.

I'm watching the sixth episode,now.I like the lights,the close - ups.25 minutes per episode,short but good stories.