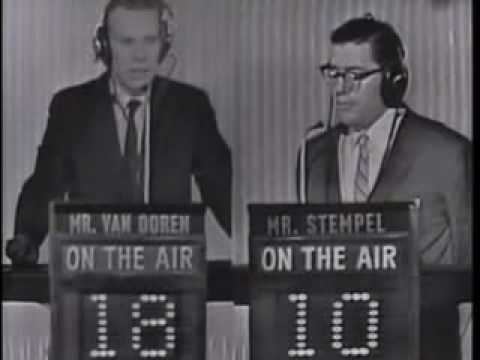 Twenty One was an American game show originally hosted by Jack Barry which aired on NBC from 1956 to 1958. Produced by Jack Barry-Dan Enright Productions, the program became notorious for being a rigged quiz show which nearly caused the demise of the entire genre in the wake of United States Senate investigations. The 1994 movie Quiz Show is based on these events.

A new version aired in 2000 with Maury Povich hosting, lasting about four months, again on NBC.

The initial broadcast of Twenty One was played honestly, with no manipulation of the game by the producers. Unfortunately, that broadcast was, in the words of producer Dan Enright, "a dismal failure"; the first two contestants succeeded only in making a mockery of the format by showing how little they really knew. Show sponsor Geritol, upon seeing this opening-night performance, reportedly became furious with the results, and said in no uncertain terms that they did not want to see a repeat performance.

The end result: Twenty One was not merely "fixed", it was almost completely choreographed. Contestants were cast almost as if they were actors, and in fact were active and (usually) willing partners in the deception. They were given instruction as to how to dress, what to say to the host, when to say it, what questions to answer, what questions to miss, even when to mop their brows in their isolation booths (which had air conditioning that could be cut off at will, to make them sweat more).

Charles Van Doren, a college professor, was introduced as a contestant on Twenty One on November 28, 1956, as a challenger to then-champion Herbert Stempel, a dominant contestant, though somewhat unpopular with viewers and eventually the sponsor. Van Doren and Stempel ultimately played to a series of four 21–21 games, with audience interest building with each passing week and each new game, until finally the clean-cut, "All American Boy" newcomer was able to outlast his bookish, quasi-intellectual opponent, who at one point after the game was referred to backstage as a "freak with a sponge memory". The film Quiz Show depicts the turning point as coming on a question directed to Stempel: "What motion picture won the Academy Award [for Best Motion Picture] for 1955?" Stempel legitimately knew the answer to that question was Marty, as it was one of his favorite films. The producers ordered him to answer the question with 1954's Best Motion Picture winner, On the Waterfront.

Stempel later recalled that there was a moment in the booth when his conscience and sense of fair play warred with his sense of obligation and that he almost disrupted the scripted outcome by giving the correct answer. Stempel answered incorrectly as he was instructed, but redeemed himself by staying in the game and earning enough points to tie Van Doren's score, unlike the depiction of events in Quiz Show. Stempel was finally defeated in the next game, with Van Doren leading: the surviving kinescope of the broadcast shows Stempel failing to come up with the title of William Allen White's August 15, 1896, editorial in the Emporia Gazette, "What's the Matter with Kansas?" After the missed question, Van Doren quit with 18 points, which was enough to win. Van Doren's victory began one of the longest and most storied runs of any champion in the history of television game shows. Van Doren's popularity soared as a result of his success on Twenty One, earning him a place on the cover of Time magazine and even a regular feature spot on NBC's Today show; at one point, the program even surpassed CBS' I Love Lucy in the ratings. He was finally unseated as champion on March 11, 1957, by Vivienne Wax Nearing (1926–2007), after winning a total of $143,000.

In the meantime Stempel, disgruntled over being ordered to "take a dive", attempted to blow the whistle on what exactly was going on behind the scenes at Twenty One, even going so far as to have a federal investigator look into the show. Initially, little came of these investigations and Stempel's accusations were dismissed as jealousy because there was no hard evidence to back up his claims. While a congressional investigation did affect Twenty One during this period, the investigation in question was the HUAC hearings into possible Communists in entertainment; the show's director, Charles S. Dubin, was fired by NBC in June, 1958, after he refused to answer whether he ever had been part of the Communist party.

In August 1958 Dotto, a popular CBS daytime game show, was abruptly canceled after a contestant found a notebook containing the answers to every question that was to be asked to the show's current champion, future journalist Marie Winn. Stempel's allegations about Twenty One began to gain credulity. A grand jury was convened in Autumn 1958 to investigate Dotto and other possible game show fixing, investigated by Joseph Stone, assistant New York district attorney. Stone says in his book Prime Time and Misdemeanors that question writer Glorianne Rader was instructed by Dan Enright and associate producer Al Freedman, who had chosen the categories for the next broadcast earlier in the week, to place them in Barry's dispensing machine a few minutes before airtime; this was done to avoid any slipups in the planned outcome. Stone reached out to former contestants of Twenty One, including one Richard Jackman. Jackman, asked by Enright if he would tell the truth if approached by Stone, said that he would confess to the fixing of Twenty One. Three days after Jackman confessed to Stone, and without advance public warning, Twenty One was canceled after its broadcast of October 17, 1958 amongst plummeting ratings. A nighttime version of Concentration took over its time slot the following week.

Further eroding Barry and Enright's claims of honesty, another former contestant, James Snodgrass, came forward with corroborating proof the show was rigged: in a series of registered letters he had mailed to himself, Snodgrass documented each and every answer he was coached on prior to air time and testified to the fact in front of Congress in 1959.

The scandal forced producers Barry and Enright into virtual exile. Barry would not host another national TV show for more than a decade, and Enright moved to Canada to continue his production career.

I think Quiz Show is a great film and find it is fascinating to see the differences between this episode and how it was dramatised in the movie.