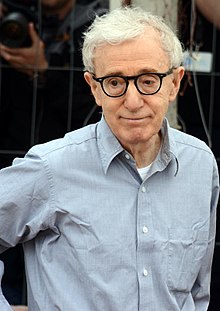 Website woodyallen.com
Woody Allen (born Allan Stewart Konigsberg; December 1, 1935) is an American director, writer, actor, comedian, and musician whose career spans more than six decades. He began his career as a comedy writer in the 1950s, writing jokes and scripts for television and publishing several books of short humor pieces. In the early 1960s, Allen began performing as a stand-up comedian, emphasizing monologues rather than traditional jokes. As a comedian, he developed the persona of an insecure, intellectual, fretful nebbish, which he maintains is quite different from his real-life personality.[1] In 2004, Comedy Central ranked Allen fourth on a list of the 100 greatest stand-up comedians,[2][3] while a UK survey ranked Allen as the third greatest comedian.[4]

By the mid-1960s, Allen was writing and directing films, first specializing in slapstick comedies before moving into dramatic material influenced by European art cinema during the 1970s, and alternating between comedies and dramas to the present. He is often identified as part of the New Hollywood wave of filmmakers of the mid-1960s to late 1970s.[5] Allen often stars in his films, typically in the persona he developed as a standup. Some of the best-known of his over 50 films are Annie Hall (1977), Manhattan (1979), Hannah and Her Sisters (1986), and Crimes and Misdemeanors (1989). In 2007 he said Stardust Memories (1980), The Purple Rose of Cairo(1985), and Match Point (2005) were his best films.[6] Critic Roger Ebert described Allen as "a treasure of the cinema".[7]

Allen has received many accolades and honors throughout his career. He has won four Academy Awards: three for Best Original Screenplay and one for Best Director. He also garnered nine British Academy Film Awards. His screenplay for Annie Hall was named the funniest screenplay by the Writers Guild of America in its list of the "101 Funniest Screenplays".[8] In 2011, PBS televised the film biography Woody Allen: A Documentary on the American Masters TV series.[9]

Early marriages and relationships
Allen married 17-year-old Harlene Rosen when he was 20 in 1956; the marriage lasted until 1959.[151] Rosen, whom Allen referred to in his standup act as "the Dread Mrs. Allen", sued him for defamation as a result of comments he made during a television appearance shortly after their divorce. In his mid-1960s standup album Standup Comic, Allen said that Rosen had sued him because of a joke he made in an interview. Rosen had been sexually assaulted outside her apartment. According to Allen, the newspapers reported that she had been "violated". In the interview, Allen said, "Knowing my ex-wife, it probably wasn't a moving violation." In an interview on The Dick Cavett Show, Allen repeated his comments and said he had been sued for "$1 million."[152]

Allen married Louise Lasser in 1966. They divorced in 1970. Lasser appeared in three Allen films shortly before and after the divorce—Take the Money and Run, Bananas, and Everything You Always Wanted to Know About Sex* (*But Were Afraid to Ask)—and later briefly appeared in Stardust Memories. In 1969 Allen cast Diane Keaton in his Broadway show, Play It Again, Sam. During the run she and Allen became romantically involved. Although they broke up after a year, she continued to star in his films, including Sleeper as a futuristic poet and Love and Death as a composite character based on the novels of Tolstoy and Dostoevsky. Annie Hall was very important in Allen's and Keaton's careers. It is said that the role was written for her, as Diane Keaton's birth name was Diane Hall. She then starred in Interiors as a poet, followed by Manhattan. In 1987, she had a cameo as a nightclub singer in Radio Days, and she was chosen to replace Mia Farrow in Manhattan Murder Mystery after Allen and Farrow began having problems with their relationship. As of 2004 Keaton and Allen remained close friends.[153]

The film Manhattan is said by the Los Angeles Times[154] to be widely known to have been based on Allen's romantic relationship with actor Stacey Nelkin. Her bit part in Annie Hallended up on the cutting room floor, and their relationship, although never publicly acknowledged by Allen, reportedly began when she was 17 and a student at New York's Stuyvesant High School.[155][156][157] Nelkin played the role of Rita in Woody Allen's 1994 film, Bullets over Broadway.

Mia Farrow
Allen and Mia Farrow met in 1979 and began a 12-year relationship in 1980;[158] Farrow starred in 13 of Allen's films from 1982 to 1992.[159] Throughout the relationship they lived in separate apartments on opposite sides of Central Park in Manhattan. Farrow had seven children when they met; there were three biological sons from her marriage to composer André Previn, three adopted girls (two Vietnamese and one Korean, Soon-Yi Previn), and one adopted Korean boy, Moses Farrow.[158]

In 1984 she and Allen tried to have a biological child together; Allen agreed to this on the understanding that he need not be involved in the child's care. When the effort to get pregnant failed, Farrow adopted a baby girl, Dylan Farrow, in July 1985. Allen was not involved in the adoption, but when Dylan arrived he assumed a parental role toward her and began spending more time in Farrow's home.[160] On December 19, 1987, Farrow gave birth to Allen's biological child, Satchel Farrow (later known as Ronan Farrow).[161][162] In 1991 Farrow wanted to adopt another child. According to a 1993 custody hearing, Allen told her he would not object to another adoption so long as she would agree to his adoption of Dylan and Moses; that adoption was finalized in December 1991.[160] Eric Lax, Allen's biographer, wrote in The New York Times in February 1991 that Allen was "there before they [the children] wake up in the morning, he sees them during the day and he helps put them to bed at night".[158] 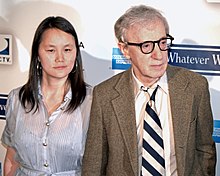 
In 1978 Farrow and André Previn adopted Soon-Yi Previn, who had been abandoned in the slums of Seoul. At the time of the adoption, her passport said that she was seven; a bone scan in the US reportedly determined that she was between five and seven.[a] Living with Farrow, Soon-Yi is said to have had little contact with Allen until 1990, when she asked to accompany him to a basketball game. They attended more games together and by 1991 had become closer.[160] In September 1991 she began her studies at Drew University in New Jersey.[164]

In January 1992, Farrow found nude photographs of 22-year-old Soon-Yi in Allen's home. Allen, then 57, told Farrow that he had taken them the day before, around two weeks after he first had sex with Soon-Yi.[165] This resulted in a bitter breakup of Farrow's and Allen's relationship; both parties instructed lawyers shortly after the photographs were discovered.[160][163] That summer, Soon-Yi was asked to leave summer camp because she was spending too much time taking calls from a "Mr. Simon", who turned out to be Allen.[164] Allen issued a statement on August 17, 1992, saying that he was in love with Soon-Yi.[166] They were married in Venice on December 23, 1997,[167] and adopted two children, Bechet and Manzie.[168][169] They live in the Carnegie Hill section of Manhattan's Upper East Side.[170]

Assault allegation
Main article: Woody Allen sexual assault allegation
According to court testimony, on August 4, 1992, Allen visited the children at Mia Farrow's home in Bridgewater, Connecticut, while she was out shopping with a friend.[163] The following day, that friend's babysitter told her employer that she had seen Allen behaving inappropriately with Dylan.[171] When Farrow asked Dylan about it, Dylan alleged that Allen had touched Dylan's "private part" while they were alone together in the attic.[163] One woman employed to care for Farrow's children said that for about 20 minutes that afternoon she had not known where Dylan was, while a second said that, at one point, Dylan had been wearing no underwear under her dress.[171] Farrow told Dylan's pediatrician, who informed authorities.[172][173]

After being told about the allegation, Allen began proceedings in New York Supreme Court for sole custody of his and Farrow's biological son, Satchel, as well as Dylan and Moses, the two adopted children of Farrow that Allen had adopted as well.[174] He strongly denied the allegation, calling it "an unconscionable and gruesomely damaging manipulation of innocent children for vindictive and self-serving motives".[175] A months-long investigation by the Child Sexual Abuse Clinic of Yale–New Haven Hospital concluded that Dylan had not been sexually assaulted.[176] In June 1993 the judge rejected Allen's bid for custody. He said that the Yale–New Haven team's unwillingness to testify in court, except through a deposition, together with the destruction of its notes, had rendered its report "sanitized and, therefore, less credible".[177] In September that year the state prosecutor announced that he would not pursue charges.[178] On May 23, 2018, a blog post by Moses Farrow, the son of Woody Allen and Mia Farrow, defended Allen against the allegations leveled against him by Mia and Dylan Farrow.

Woody Allen: I Should Be A #MeToo Poster Boy

Woody Allen isn’t happy with the way people keep lumping him together with all the other Hollywood people who are being slammed with sexual misconduct claims.

Speaking to Argentinian news program “Periodismo Para Todos” (via Quartz & The Playlist), the filmmaker opened up about the rise of the #MeToo movement and why his on-set record should be celebrated:

“I’m a big advocate of the #MeToo movement. I feel when they find people who harass innocent women and men, it’s a good thing that they’re exposing them. But you know, I should be the poster boy for the #MeToo movement. Because I have worked in movies for 50 years. I’ve worked with hundreds of actresses and not a single one – big ones, famous ones, ones starting out – have ever ever suggested any kind of impropriety at all. I’ve always had a wonderful record with them.

I think in any situation where anyone is accused of something unjustly, this is a sad thing. I think everybody would agree with that… Everyone wants justice to be done. If there is something like the #MeToo movement now, you root for them, you want them to bring to justice these terrible harassers, these people who do all these terrible things. And I think that’s a good thing.

Allen was asked about the #MeToo movement due to a history of alleged inappropriate sexual conduct, namely being accused by adopted daughter Dylan Farrow of sexual abuse when she was a child – claims Allen has consistently denied and was never charged for. In recent months he’s grown frustrated:

I mean this is just so crazy. This is something that has been thoroughly looked at 25 years ago by all the authorities and everybody came to the conclusion that it was untrue. And that was the end and I’ve gone on with my life. For it to come back now, it’s a terrible thing to accuse a person of. I’m a man with a family and my own children. So of course it’s upsetting.”

Many of Allen’s previous actors and collaborators have come forward in recent months to say they would not work with him in the future including the likes of Greta Gerwig, Timothee Chalamet, Michael Caine and Ellen Page. Allen’s latest film “A Rainy Day in New York” is still in post-production with no release date set.
You must log in or register to reply here.
Share:
Facebook Twitter Reddit Pinterest Tumblr WhatsApp Email Link
Top