VIP
Human Centipede movies, scared me pretty good. 7 was pretty bad the guy on the bed. I love zombie movies, but any one of them that really gets into the gore and blood is really bad turns me away at times.

VIP
That reminds me of a scene in Human Centipede part 2. The whole movie is in black and white, except for one scene, were he gives the front person a laxative...

OK I'll take one for the team:
That'll be the brown scene then?

Carol said:
OK I'll take one for the team:
That'll be the brown scene then?
Click to expand...

VIP
Ed and his dead mom the mower to the zombies, funny but bloody. Basket Case, mainly the one were he has kids with a normal girl. Left me WTH, how, where is it, and every weird thought on how he could make kids.

High Plains Drifter said:
Ed and his dead mom the mower to the zombies, funny but bloody
Click to expand...

Braindead is awesome and is indeed a funny and very bloody scene. 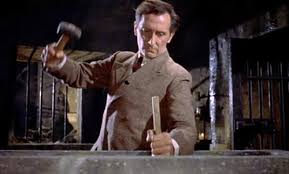 Peter Cushing, of course, always a perfect gentleman, and often the dashing hero. Once little me had given his Van Helsing (and Holmes) top approval, I gave him a pass for all other roles where he seemed to get hung up on assembling people from filched body parts, building Death Stars, etc.

I didn't watch much horror as a child outside of the Universal movies and other classics, but when I was fourteen, I watched A Nightmare on Elm Street, and fell in love with Heather Langenkamp. She introduced me to the concept of the "Final Girl" and she did it well.

chainsaw_metal1 said:
She introduced me to the concept of the "Final Girl" and she did it well.
Click to expand...

Good evening to you, sir,
Still never seen that - I hope that means she's the one that makes it out alive? Tell me as a Spoiler if you have to (but I'm still dealing with the idea that Delta thought they were sponsoring the Julius Caesar with the dancing squirrels, third act ballet and happy ending...)


She does, indeed, make it out alive. In the end, everyone ends up still alive, but the ending proves to be a surreal dream, where Freddy is still very much a threat, and you are left to wonder if any of it happened, or if this is happening. Craven and his producers couldn't agree on an ending, so they basically took the three they had and blended them all together. It makes for a really cool end to a great horror flick.

Ooh, thank you, that sounds like fun - somehow I missed out on all those slasher-horrors with endless sequels, Friday 13s, Halloweens and these and the first ones never seem to get shown on TV. Looks like reviews and clips of Parts 8 - 27 inclusive of such have put me off needlessly.
You are, as ever, a gentleman and a scholar.

Now excuse me - I think my prosecco will be sufficiently chilled now, and I have a box set of Sharpe to get back to . (2 weeks to the end of tern and a girl's gotta do what a girl's gotta do to get there with a soul intact)

Dr. Terror's House of Horrors
The House That Dripped Blood
From Beyond the Grave
Tales from the Crypt
Vault of Horror

Also any of the latter Universal monster movies like

PSYCHO (1998) (It fascinates me as a cinematic outrage!)
DR. TERRORS HOUSE OF HORRORS (Tired of one story? Theres another along in a minute.)
HOUSE OF DRACULA (A doctor can cure vampirism/lycanthropy? Just an interesting entry in the saga.)
GHOST OF FRANKENSTEIN (The first of the non-Karloffs and often overlooked)
THE SHINING (I still haven't decided if this one is scary or not!)

That's my list for today. I am sure that it is constantly fluctuating, but they are certainly five of my most re-watched films.

It is bad, but there is a morbid fascination in watching these actors, mostly miscast, trying to replicate the natural magic of the original. And failing, but in a really interesting way.

It doesn't make me angry as a film, coz I just see it as a cover version of the original. Same tune, different band. And cover versions can never replace the original, but can be interesting in their own right.

That's my justification for watching, what is in fact Gus Van Sant's pile of rubbish anyway!

And recently it has started being reflected on the telly, with the LUCILLE baseball bat scene in Walking Dead, for example.

At some point though, I think it crosses the line into being so ridiculously over the top that you can end up questioning why the movie or show that you are watching, seems more intent on shocking you than entertaining you!

I did like the Evil Dead and Army of Darkness movies. Although I'm not sure they would be considered bad. They are actually classics.